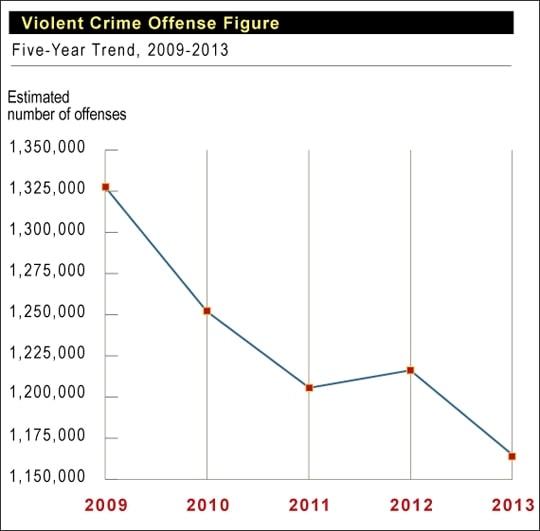 Crime in the United States, 2013 publication shows the downward progression in the number of reported violent crimes over the past five years. (Graphic: FBI)

Violent crime in the U.S. decreased last year, continuing a trend five-years running, according to the Federal Bureau of Investigation.

However, starting in 2013, the UCR Program began collecting rape data under a revised definition. Rape is now considered, “Penetration, no matter how slight, of the vagina or anus with any body part or object, or oral penetration by a sex organ of another person, without the consent of the victim.”

With that being said, not all law enforcement agencies have been able to convert their records management systems to reflect the new definition yet, so this year’s report includes data collected under the previous (or legacy) definition as well as the revised definition.

In the commission of the crime, firearms were used in 69 percent of the nation’s murders, 40 percent of robberies, and 21.6 percent of aggravated assaults.

Burglary victims suffered an estimated $4.5 billion in property losses, of which 74 percent were residential properties.

Law enforcement across the country made an estimated 11.3 million arrests, of those 480,360 for violent crimes and 1,559,284 for property crimes.

The FBI describes the UCR Program as a meaningful way to gauge crime in this country, but cautions individuals from making hasty conclusions. “Valid assessments are only possible with an understanding of various factors affecting each jurisdiction,” the agency says. For more details, read the UCR Statistics: Their Proper Use section.