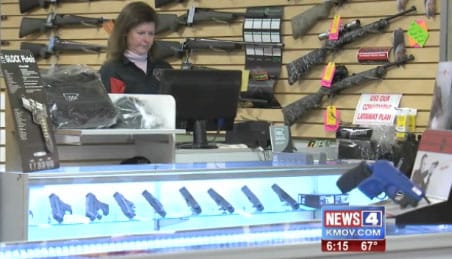 Steven King, owner of Metro Shooting Supplies, said the weekend guns sales were all for either home or self-defense firearms. (Photo: KMOV)

Gun sales have spiked and some business owners have started boarding up their shops in and around Ferguson, Missouri, as some residents expect civil unrest to return with the looming decision of the grand jury on whether or not to indict officer Darren Wilson in the August shooting death of Michael Brown.

The grand jury has until January to decide the fate of Wilson, but rumors on social media last week indicating that the decision could be announced as soon as Friday drove fear in residents.

Steven King, owner of Metro Shooting Supplies in nearby Bridgeton, said his shop sold about three times that of an average weekend. In addition, training classes are booked through the new year.

“Friday morning (Nov. 7) it was at a fevered pitch and this entire weekend we’ve sold over 100 guns in three days. This is very abnormal,” King told KMOV.

King said a typical weekend brings about 30 gun sales. He also added that when violence and looting broke out in August following the shooting, guns sales skyrocketed ten-fold. And while the previous sales spike was primarily from residents in and around Ferguson, King says this time the buyers are from all over.

“With all the rumors on the internet, they are saying every neighborhood is unsafe, there is a possibility of a strike in any neighborhood,” King said. “So now we have 3.3 million people in the St. Louis metropolitan area saying, ‘Is it going to happen to us?’”

Shannon Kozeny, a single mother who lives in Kirkwood, about 20 miles from Ferguson, said, “You don’t have to live in Ferguson to feel threatened. God forbid anything happens, I have a little girl to protect. If it comes down to life and death between my kid and somebody else, somebody who’s bigger than us, and angrier, I will stop it.”

King said the fear can literally be seen in people’s eyes and that many are anticipating it to be far worse than last time. And it’s that fear, the fear of the unknown, which is driving sales upward, according to King.

In fact, area school districts have asked that the grand jury’s decision be announced either on the weekend or after school hours for the sake of student safety.

Regardless of what rumors may abound, the prosecutor said the grand jury’s decision will be announced from his office first and anything else is simply that – rumors.

Nonetheless, residents and business-owners alike are hoping for the best, but preparing for the worst by boarding up windows and taking other precautions.

Constance Garnett, who has had her hair salon, Taste of Honey, for about 11 years, told reporters that her shop now looks like it’s ready for a hurricane.

“It’s hurtful, it’s really, really hurtful,” Garnett said. “We don’t have the constant flow of customers that we normally have coming through here because everybody is afraid.”

Other local businesses share a similar sentiment. Normally-packed restaurants are near empty, churches are seeing fewer attending services, food pantrys are getting fewer donations and some residents have even had to put home repairs on hold because contractors refuse to come to the area.

But not all businesses are preparing for more violence by boarding up shop either.

Charles Davis, who opened the Burger Bar the day before Brown was shot, said his business survived the first round of violence and he has no intention of changing anything this go around.

“I want to make a statement to the community. I’m here, I’m open and I’m not going anywhere. I refused to shut down then, I refuse to shut down now,” Davis said, adding the only thing he fears is God himself.

Nonetheless, while some prepare for what they fear will be far more violence than before, Gov. Jay Nixon addressed the impending fear in a press conference Tuesday.