MKS brings back the 1911A1 Government Model with Inland 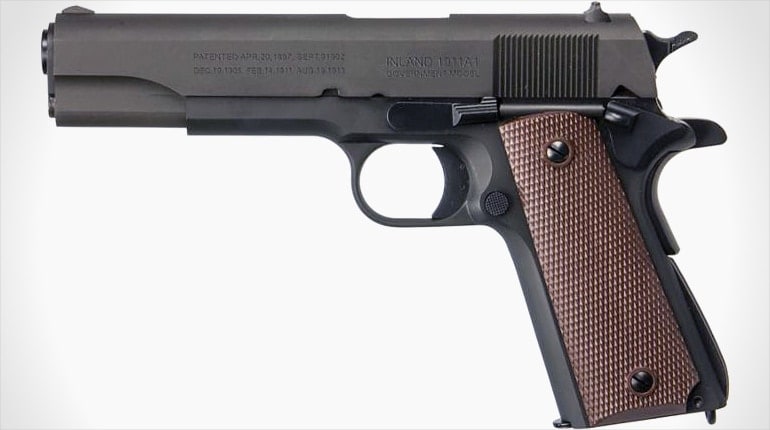 A modern take on a timeless design. (Photo: MKS)

While there are many great new designs on the popular, even crowded 1911 market, some models are special because at one point, they weren’t. Military issue, general infantry pistols, Government Model 1911A1s.

The M1911A1 is the military’s most iconic service pistol, and they’re not too hard to find. With an estimated 2.5 million Model 1911 and 1911A1 pistols manufactured for the U.S. Armed Forces alone, there are quite a few originals still available for collectors.

As collection pieces, they pose a real dilemma for shooters. Depending on the condition and the make, they can be found starting at around $1,000 to $2,000. For that kind of money you can get a very nice, new 1911 that’s guaranteed to be a great shooter.

Then there’s the matter of shooting an antique, putting unnecessary wear on the gun, potentially doing harm to its value. Whether it’s a show piece or a family heirloom it’s often better not to shoot an original 1911A1, no matter how much it’s begging to be shot.

Thankfully MKS Supply and Inland Manufacturing have a solution. They’re making new-production Model 1911A1 pistols that are faithful to the original design yet made with superior materials. These are M1911A1s you can shoot all day.

“Originals of these guns can get pretty expensive in good-looking, useable form and, in collector quality, just flat painful to buy and then not use,” said MKS Supply’s Charles Brown. “But a real-deal, affordable, high-quality clone you can shoot the heck out of without fear of hurting collector value, now that is fun.”

The new 1911s will be made under the Inland brand. Inland, a division of General Motors, made millions of firearms for the U.S. military with one notable exception: they never made 1911s.

Inland is best known for making M1 Carbines. By manufacturing their M1911A1 pistols under the Inland brand these guns will never be mistaken for USGI pistols and won’t pass off as originals. And at the same time they share a lineage to Inland’s contributions to the war effort.

They are true to the M1911A1 in appearance, but they’ve seen some tweaks under the hood. These pistols are made with 4100-series steel and updated internals to improve their performance, accuracy and reliability.

Inland’s 1911s maintain the original vertical slide serrations, fixed sights and lanyard loop. The grips are plastic, too, although the plastic has also been improved using modern polymers for added durability and extended longevity.

The new Inland M1911A1 will look great next to one of these new-manufacture Inland M1 Carbines. (Photo: MKS)

When a shooter sees an Inland M1911A1 they’ll know that it’s one gun they can take to the range and even tear it up with a little competition shooting. And it’s a perfect companion for the new-manufacture Inland M1 Carbines that MKS just announced.

With an MSRP of just $749 these are very accessible guns and a breath of fresh air for traditionalists. Now you can have your M1911A1 and shoot it, too.