New Sightmark Wolfhound and Pinnacle optics in 6x and 1-6x 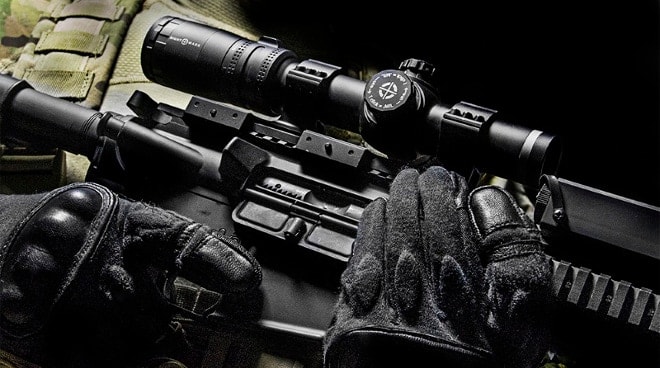 The Pinnacle 1-6×24 TMD is a practical-tactical riflescope with true 1x magnification. (Photo: Sightmark)

Sightmark added two new optics to its catalog, the impressive and versatile Pinnacle 1-6×24 TMD and the attractively-priced Wolfhound 6×44 prismatic scope. Optimized for the black rifle crowd these optics may come in handy for shooters of all stripes.

The Pinnacle 1-6x TMD is a contender in the new field of 1-6x scopes that offer true 1x performance — zero magnification — for close-quarters, both-eyes-open shooting, while still being capable of 6x magnification for shooting at targets at mid- to long-range.

It features an illuminated reticle on the first focal range for the same holdovers at all magnification levels with an oval-dot center for fast target acquisition at close range. The reticle is hashed out in mils for windage and elevation and can be set to red or green or left off for black. The scope has five brightness settings for a battery life between 50 and 900 hours. 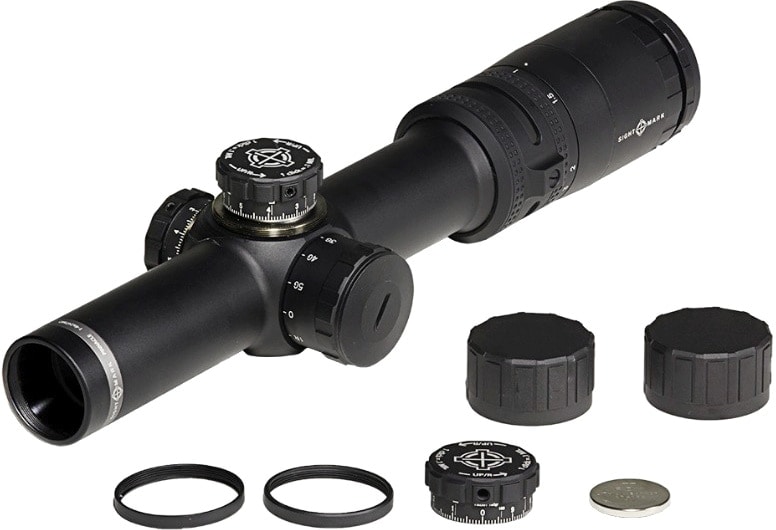 This scope is designed for use with ARs and the dials are calibrated for 0.1 mil clicks specifically for use with 55-grain 5.56 and 180-grain 7.62 NATO loads, but there’s no reason it won’t work with other rifles with the right rings. Sightmark will also offer the Pinnacle 1-6×24 with a different reticle, the 1-6×24 AAC designed for supersonic and subsonic 300 AAC Blackout rifles.

The Pinnacle 1-6×24 TMD is built on a 30mm tube and runs off one CR2032 battery. Weight-wise it’s on-par with other illuminated scopes capable of 1x magnification at 20 ounces. It comes with screw-on turret covers to lock in windage and elevation for anyone who expects to knock their guns around.

This is going to be  a popular option for competition and duty with an MSRP of $1,439. That means real-world prices will hover over $1,000, but that still makes the Pinnacle 1-6×24 one of the more affordable first focal place 1-6x scopes on the market. 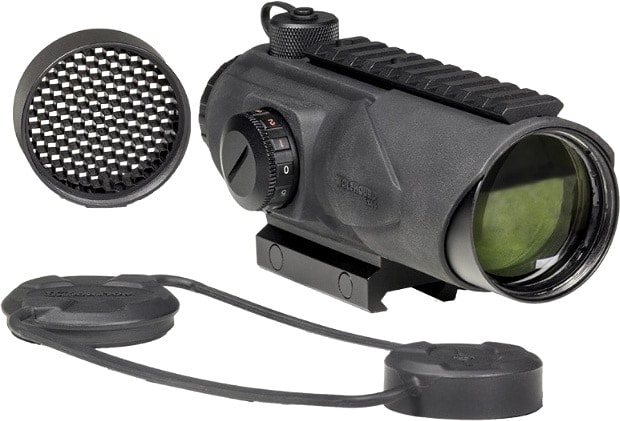 The recently-released Wolfhound 6x Prismatic Weapon Sight is a solid alternative for shooters that set their scope’s magnification to its highest and never look back. The Wolfhound 6x has a simple horseshoe-dot reticle with marked holdovers out to 900 yard when shooting 55- and 62-grain .223 Remington or 5.56 NATO.

The reticle’s dot is a precise 0.5-MOA dot for tight groups at all ranges and the semi-circle is broad at 7.5-MOA for fast, up-close shooting. With a little practice it’s possible to use a magnified optic when shooting with both eyes open at close ranges and be very effective.

The reticle is illuminated with red and green settings and has five brightness settings. It has good battery life from 200 hours at its brightest setting to 4,000 hours at the lowest on a single CR2032. Like all prismatic scopes it runs just fine without a battery, although the reticle won’t be illuminated, it just stays black. 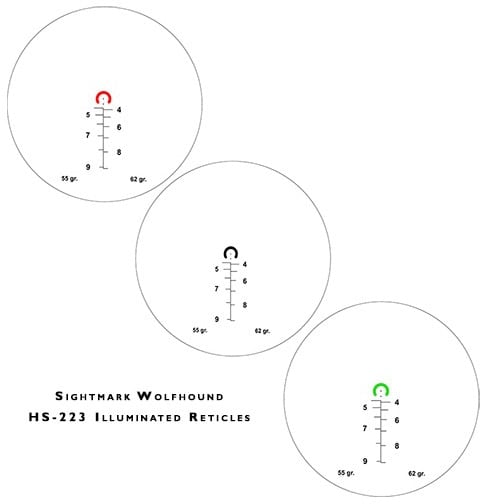 The Wolfhound uses a simple reticle with holdovers out to 900 yards. (Photo: Sightmark)

The Wolfhound promises excellent light transmission with its huge 44mm objective lens. One of the primary benefits of using a prismatic optic is that they deliver an image that’s large and bright with unmatched clarity compared to similar magnified optics.

It uses a very durable rubber over-molded 6061 aluminum tube construction similar to the previous Wolfhound 3x but with a different profile. Prismatic optics can take a beating thanks to their simple design.

Sighmark understands that some users will still want to couple it with a non-magnified optic and for that reason the Wolfhound comes with a handy Picatinny rail on top that’s perfect for a micro red dot sight.

The Wolfhound 6x weighs 23 ounces but that includes the mount. The scope mounts directly to the flattop rail of ARs and other rifles with similar-height rail systems.

It’s also priced right with a suggested price of $479 and stores are listing it right at or around $400. For more information about these and other scopes pay a visit to the Sightmark website.