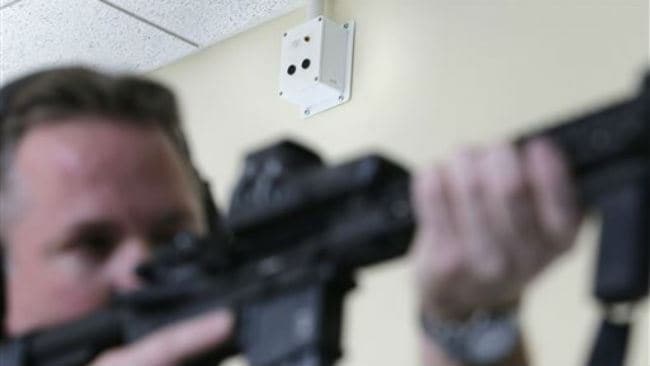 A gunshot detector sits mounted on the wall of a Massachusetts grammar school during a test of the system by police Tuesday. (Photo: Charles Krupa/AP)

Sprouting from military technology, an elementary school hosted a test of its new gunshot detection system, which will have application in active shooter events.

The system, which typically costs $50,000 to $100,000, was donated by Shooter Detection Systems of Rowley to an unidentified grammar school in the Boston suburb of Methuen. In Tuesday’s test, conducted while the school was vacated due to the Veterans Day holiday, local police demonstrated the effectiveness of the system, which can recognize gunfire, automatically send alerts, and track a moving shooter in real time.

“It’s amazing, the short, split-second amount of time from identification of the shot to transmission of the message,” Methuen Police Chief Joseph Solomon told the Lowell Sun. “It changes the whole game. Without that shot detection system, we wouldn’t know what was going on in the school … Valuable, valuable time can be lost.”

The system uses smoke-alarm sized sensors installed throughout a building to identify the acoustic signature of a gunshot and combines it with infrared camera gunfire flash detection. This information is then fed into a tracking system that issues alerts to a central panel as well as targeted smart phones and law enforcement. Shooter Detection Systems advises that the system, tested Tuesday, is the first of its kind in use in the U.S. and suffers from “nearly zero” false alerts.

Methuen School District also uses uniformed and armed school resource officers, and for now isn’t disclosing which one of its four schools the new system is installed in the interest of security while they hope grant money will pay to expand the program to all of its campuses.

“As the demonstration showed, this type of technology has the potential to be an important part of a larger, comprehensive system of preparedness and response,” U.S. Rep. Niki Tsongas,D-Mass, who was present for the demonstration, told MSNBC.

The technology was pioneered in partnership with Defense Advanced Research Projects Agency, the military’s clearinghouse for future combat systems, and defense contractor Raytheon who deployed multiple versions of its Boomerang platform to Iraq and Afghanistan. In all, some 10,000 of these shot detection systems have been used with the military around the globe.

Connors advises that the company is currently installing the system in schools in two other states.