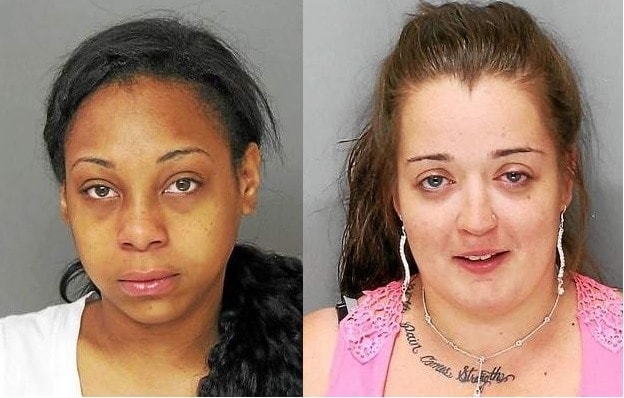 Staci Dawson, left, and Ashly Judge, right, are among the first to see a minimum of five years behind bars in the Keystone State for buying guns in straw purchases.

In Pennsylvania this week two women found themselves looking at five years or more in jail following convictions for making illegal straw purchases of guns for people not eligible to possess them.

The women, Staci Dawson, 22, of Chester, and Ashly Judge, 27, of Conshohocken, were convicted in unrelated cases of making a series of illegal gun purchases from gun shops in the state. Both are facing a mandatory five-year minimum sentence under the state’s new Brad Fox Law.

Fox, a Plymouth Township police officer and Marine, was shot in the head by a felon who had illegally purchased a gun through a third party. Following his death lawmakers in the state passed a new law to provide tougher penalties for those who lie in the course of otherwise legal gun transactions to obtain a firearm for someone who is prohibited from possessing one.

The two cases this week are the first time that the new law’s enhanced sentencing guidelines are applied.

Wednesday a county court judge handed Dawson a 6 to 12 year sentence for her role in a straw buy.

Dawson bought two guns from a Chichester gun shop in February 2013. One of these guns was later found on her boyfriend, David “D-Nice” Colon when he was arrested on gun charges. Colon, a felon, was prohibited from having a firearm.

In the case of Judge, a Delaware County jury handed down a guilty verdict this week in her role in several separate purchases in 2013.

Judge bought a Glock handgun from a licensed dealer and then sold the gun for a profit to Kareem Holmes, who even though she was aware that he was a felon and drug dealer.

Last June, she then purchased an FNH handgun and later sold it to a third party, one Lamont Carter for the purchase price and $150. In July, Judge repeated the transaction from a different shop in which she purchased a Walther handgun before delivering it to Carter for an extra $250 cash. She then used the money to buy Percocet and diapers

Her sentencing is scheduled for Jan. 8, 2015 and she is expected to receive at least five years.

The gun industry heralded such enhanced sentences of those who would illegally purchase firearms.

“Straw purchasing is a serious federal offense that unfortunately is not prosecuted nearly as much as it could and should be,” Michael Bazinet, director of public affairs for the National Shooting Sports Foundation told Guns.com Thursday.

“The Pennsylvania legislature clearly saw that this was the case in enacting the Brad Fox Law. We support this state law as a needed backstop that allows Pennsylvania to prosecute those who would purchase firearms for felons and prohibited individuals,” explained Bazinet.

The NSSF more than a decade ago established the Don’t Lie for the Other Guy program to identify would-be straw purchasers and to educate the public about the penalties involved.

“We continue to urge much tougher enforcement of the federal law,” said Bazinet.