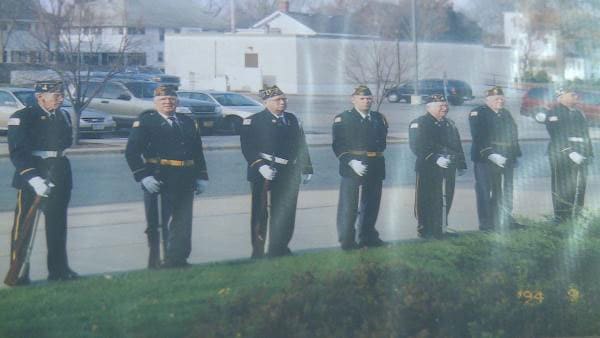 Apparently there were several concerns over the Veterans Day ceremony, but the main issue was the use of firearms on school grounds during the 21-gun salute. (Photo: WEAU)

A Veterans Day ceremony, which has previously been held at a Eau Claire, Wisconsin, school and has been a tradition since the 1930s, was moved to another location due to controversy over guns being used for the 21-gun salute.

Tim Leibham, the Eau Claire School District Executive Director of Administration, told a local ABC affiliate that each school in the district has some sort of Veterans Day program every year, but citing concerns from parents and teachers, this year was the time to do away with the 21-gun salute.

“It was just this one presentation that was longer in length. It was 60 to 90 minutes,” Leibham said. “Specifically, we had children who either had an adverse reaction to the noise or precluded from being part of the ceremony. We thought the needs of our children in our schools to be able to participate in those school activities would outweigh the 21-gun salute.”

Karen Pope, a veteran who lives in the area, said the ceremony is about teaching both adults and children alike about serving one’s country and the sacrifices made by others.

“I think it’s important to keep these traditions going, but with some reasonable understanding,” Pope said. “We need to continue to teach our young people because when we forget, is when we become complacent.”

In light of recent school shootings, it’s become increasingly difficult for the veterans to do the programs in the manner they wish, vice president of the Patriotic Council, Kaye Olsen, told WEAU.

“It’s really hard to tell the veterans they’re not allowed to bring those rifles in, which the only purpose is to honor our flag and our country and to teach the kids,” Olson said.

The rifles used during the 21-gun salute only fire blanks and the firearms have been altered so that they aren’t capable of firing live rounds. But, according to Olson, it made no difference.

“I was hoping maybe we could find a compromise,” Olson said. “But when it comes to the weapons, there was no compromise.”

“We like to honor the veterans; we bring them in on a regular basis,” Leibham said. “There are just some conditions that we have to adhere to and the shooting of guns, even with blanks, is something we don’t feel is appropriate given society, and the concerns that we have and that the community has, on school premises.”

But rather than compromising the traditional ceremony, the Patriotic Council instead chose to move the Veterans Day program to the parking lot of a nearby Burger King – complete with a 21-gun salute.