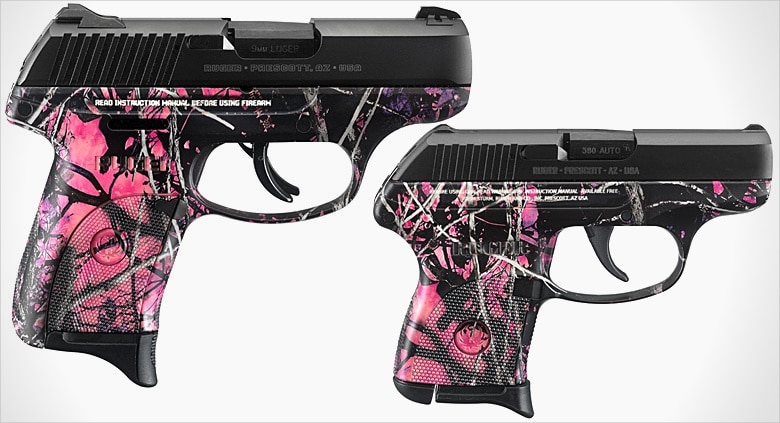 Ruger has teamed up with Davidson’s for an exclusive limited-edition run of LC9s and LCP pistols with Muddy Girl frames, one of the most popular new camo prints around.

Muddy Girl guns are making it big with women and girls who want products marketed for women but aren’t satisfied with the “shrink it and pink it” standard.

While these are compact guns and they’ve got more than a little pink, they’re just as much gun as the original versions. The Muddy Girl LC9s and LCP are functionally the same as the standard models with an edgy new look.

The LCP and LC9s are popular, well-established handguns for concealed-carry. The LC9s is a single-stack 9mm with a 7+1 capacity and the LCP is an even smaller, lighter 6+1 .380 that can be worn under just about any clothes or even tucked into a pocket.

Because the changes are purely cosmetic they will work with all LCP and LC9/LC9s holsters and accessories including lasers and lights. And there are plenty of options when it comes to things like holsters as the two guns are very well-established.

If you’re considering these for the first time now that they’re available with the Muddy Girl camo, try them out at a range first, you might be surprised.

Even though the LCP is chambered for the smaller .380 cartridge, it’s a snappy little shooter designed for people who are looking for concealability above all else. The 9mm LC9s, with its wider frame, larger grip and locked-breach recoil operation is a bit easier to handle even chambered for the harder-hitting round.

The LCP has a deliberately heavy trigger to make it safer to pocket-carry than the newly-introduced LC9s. The LC9s is an updated striker-fired version of the LC9 and it has a short, light trigger pull that promotes accuracy. It also has bigger sights that are easier to use and aftermarket sights like night sights are also available, whereas the LCP has small, fixed sights.

Still, there’s no denying that the LCP is very easy to conceal even under form-fitting clothes. Weighing just over 9 ounces, it can be comfortably carried all day, every day. In comparison, the LC9s weighs almost twice as much at 17.2 ounces, unloaded. 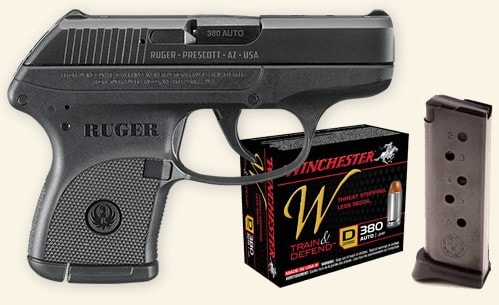 The Protection Pack free for a limited time. (Photo: Ruger)

The LCP has another thing going for it but only for a limited time. Between now and Nov. 30, if you buy a new LCP, you qualify for a free Protection Pack from Ruger which includes a spare magazine and 20-round box of Winchester Train & Defend-D hollow point ammo.

Winchester Train & Defend is a new ammo series that’s comprised of ball ammo for training and hollow points for self-defense that are loaded to match each other in terms of felt recoil. This lets shooters train with the less expensive ammo know that if they ever have to use the self-defense ammo, it will shoot exactly the same.

If you’re a Muddy Girl fan, or happen to know someone who is, and want to find out more about these reliable and affordable handguns, check out Ruger’s exclusive products page.