The real guns of 'The Pinkertons' (VIDEO)

I got a chance to chat with gun safety specialist Dave Brown about his latest project, “The Pinkertons,” a TV western about the original Pinkerton National Detective Agency and its agents.

The conversation we had surprised me on a couple of occasions, and I will definitely continue watching the series.

About the show, it’s got plenty of blackpowder action and dry humor and a lot of very real guns. As in literally, working firearms. There’s a reason the show calls for a firearms instructor and safety officer.

The Pinkertons takes place in 1865 and follows three cornerstone members of the Pinkerton National Detective Agency, Allan and his son, Will Pinkerton and Kate Warne, the world’s first female detective, as they solve crimes and mete out justice.

The characters are based on the real Pinkerton crew including Kate Warne, a key member of the team, as they crack cases drawn from the Pinkerton’s historical archives.

“Everything that we do is all based on history,” said Brown, “and there’s a lot of reality that’s used.”

“There a lot of care that’s being taken to make sure that everything the viewers see on the scree is going to be period-correct, that the locations are done correctly, that the people involved could conceivably been around in 1865 and the cases are very similar to the ones that they found in the archives,” said Brown.

The show highlights early detective techniques including fingerprint databases and photographic records that were championed by the original Pinkertons.

Brown’s role on the show is to make sure that the actors know how to handle and operate the guns on-set the way they would have as detectives at the time. As a law enforcement and security officer instructor as well as a Firearms Safety Coordinator for movies and TV, Brown is uniquely suited to the job.

And he likes his job.

Brown explained that there’s a confidence gap when he works with law enforcement, and it takes time to win over the trust needed to begin teaching gun techniques to officers.

Actors, he said, are more willing to learn, adding, “you’re making them look good, so you’re gonna be their best friend … making it look like they know what they’re doing with a gun in their hand.”

Of course, it is a TV show and there is a bit of drama folded into the mix for fun. “We also understand we’re not looking for 100 percent technical accuracy because it’s not a documentary.” 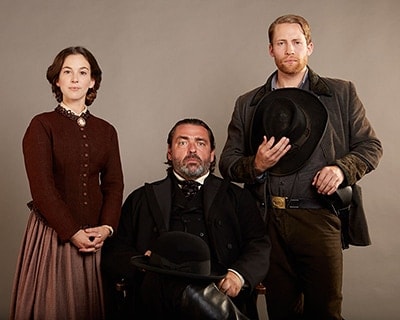 “We still do things you would not find in real life. There’s always going to be people that will pick apart what we do with the firearms,” he said. “That’s what Hollywood is all about, it’s about entertaining the audience.”

“It’s an interesting dichotomy between reality and entertaining,” Brown said. “My job is to keep people safe, make them look good but at the same time, do what the director wants.”

And safety is the rule of the day, everyday, because they don’t use prop guns on “The Pinkertons.” “Generally when someone pulls out a gun it’s going to be a real gun,” he said.

“Really.” I was shocked. The show involves pointing guns at people all the time and occasionally, pulling the trigger.

“They’re blanks of course. We just simply load them with gunpowder without the bullet. And then I’ve got little tricks to make sure the powder is compressed properly.”

When I asked why they use real cap-and-ball revolvers instead of props the answer was surprisingly simple.

“It’s safer to have something that’s reliable, that’s stronger and that’s going to work every time,” he explained.

“Many of them are actually real firearms that are completely un-modified. Anything that’s a pump-action or a revolver doesn’t have to be modified to fire blanks.”

Prop guns just aren’t made as well as the real thing he explained, and when you load them with blanks you’re only adding a layer of risk to the shoot. By using period-correct replica firearms, Brown knows the guns won’t blow up in the actor’s hands. They also look better.

“Anything that’s a replica is very poor quality; doesn’t look good on camera.”

“It’s better, safer and more reliable to use real firearms. But now, of course, you’re depending on the expertise of the person who’s responsible for the safety of those firearms, and that’s where I come in.”

Brown and his team have total control over all of the guns on-stage. Only their guns are allowed on the sets and there is a complete ban on ammunition. No one is allowed to bring their own guns for any scene — all the guns are provided by the crew.

“That’s one of the very strict rules of film-making.”

“I don’t want to say we violate some basic safety rules but we do things in film that you wouldn’t do in real life,” he said. I pointed out that includes shooting your friends.

Once I found out that they’re using real guns I had to know makes their guns.

“Pietta is probably one of the biggest ones. Traditions firearms, their line of blackpowder revolvers,” said Brown, adding “Cimarron and Uberti.”

When it comes to rifles they use a lot of Henry repeaters, which were introduced in 1860. “As much as possible everything is absolutely period-authentic. Everything is 1865-1866 which is the time period of the TV series.”

I’m going to keep watching “The Pinkertons” for the action, light-hearted adventure and definitely the guns, but also because it’s pretty unique show.

It’s the type of television my dad told me I could do my homework later if I came and watched it with him. It’s fun, engaging and true to the real men and, well, woman of the Pinkertons, and it’s always nice to get my TV Western on.

“The Pinkertons” has a bit of that new show smell where people are still learning how to work with each other but it’s charming and the cast and crew get along well.

Brown told me that he started shooting recreationally with Jacob Blair, who plays Will Pinkerton, in their off time. When Martha MacIsaac, who plays Kate Warne, found out, she was pretty upset.

Mostly because they forgot to invite her. The three plan to go shooting together in the future.