Editorial: Whose patient visit is this anyway, gun-owners?

People who are hostile to the right of self-defense want doctors to go off on paternalistic fishing expeditions when they see patients to determine whether they own guns or not. But when I completed my training to become a physician assistant in internal medicine during the 1980s and gun crimes were starting to peak (ironically, I worked in the medical care clinics of a prison system), no one ever mentioned that healthcare professionals should arbitrarily inquire about gun ownership.  I was never taught to ask about it because it was never deemed necessary to successfully treating patients. 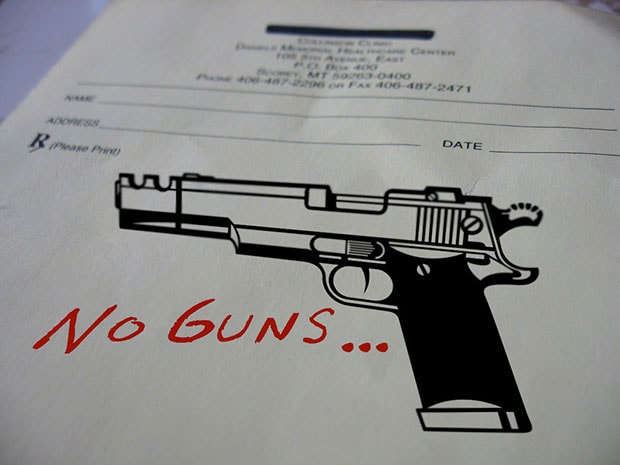 I know how to perform a very thorough history and physical (H&P) examination, which is a dying art in our medical care industry that rewards technology, procedures, and data collection at the expense of safety and effectiveness. But, instead of repairing doctor-patient relations, self-defense opponents see current healthcare upheavals as an opportunity to advance an agenda aimed at people whose lifestyle choices they dislike.

For the uninitiated, there are predominantly two kinds of H&Ps. The first is a directed H&P, often recorded as Subjective-Objective-Assessment-Plan or SOAP. The second is called a review of systems (ROS) and is much more thorough. SOAP notes are for limited, discrete problems, such as when you turn your ankle during a run and are concerned about whether it might be broken. The ROS on the other hand is an in-depth conversation and exam, the kind that happens with a new patient or a patient with a chronic ailment, such as diabetes, that can affect multiple organ systems. Neither makes for an obvious entry to talk about firearms.

This issue arose in Florida in 2011 when the legislature passed, and Governor Rick Scott signed, a bill that put physician inquiries about gun ownership off limits unless the inquiry is relevant to the patient’s medical care or safety. The text of the law in question is available here. The Florida statute was upheld in 2014 by a federal appeals court as a reasonable limitation on physician speech. By the way, we place all kinds of limits on physician speech: physicians cannot solicit sex from patients; they cannot make false claims about their “success” rates; they cannot solicit payment in excess of their contractual limits; they cannot threaten or intimidate patients; they cannot refer people to facilities in which they have a financial interest, without disclosing the same.

So, why is the restriction on asking about guns so important? Because the entire line of inquiry is politically motivated.

The cover story for this subterfuge is that when physicians ask about firearms and safety issues, they generate a dialogue with patients that could end up saving lives. Government-promoted saviors saving, as an Obamacare czar might put it, stupid Americans from themselves.

I don’t see it.  In this day and age, when there is, literally, no shortage of access to health and safety information, it simply isn’t believable that physicians are the key to safe and responsible healthy living generally, let alone gun ownership in particular.

Take my own family as an example. Last spring, my son had a sports physical before starting summer camp. It was a ROS by his pediatrician who had not seen him in years (because healthy people going to the doctor is a waste of time and money), and it ended up as it should have, with the doctor and my son having a very enjoyable conversation about his good health and his athletic goals.

The doctor did not ask me about whether I speed or drive under the influence (both far more likely to injure or kill my son than any of our firearms), whether I have stored my lawn mower’s gas can safely, if I have too many electronic devices plugged into one outlet, the manner in which we store caustic cleaning supplies, or whether our son goes swimming without supervision. In fact, if the doctor attempted to explore all the potential causes of preventable injury to my child, we’d never have gotten to the crux of the matter at hand: his signing off on my child’s fitness for summer camp. The physician trusted me to be a responsible parent, saw a happy, healthy kid, observed the obvious love and respect my son and I have for each other, and, based on the utter lack of evidence that anything is amiss, didn’t stray into ideological quicksand.

There are also commercial and philosophical considerations. The doctor is a vendor to me, and I am in charge of the relationship, not him. I am paying for the time and transaction, either directly or through third party insurance for which I have sacrificed a portion of my wages. When we propose that physicians behave as surreptitious public health data collectors for all manner of perceived social ills, we distort a fundamental fact: I visit the doctor voluntarily in order to buy a specific skill or service; it is no different than when I take my car to the shop. I owe him no more explanation for my legal and rational lifestyle choices than I owe my auto mechanic.

None of this diminishes a physician’s responsibility to observe and then make medically legitimate inquiries or suggestions or report apparent abuse, criminality, negligence, or endangerment. But, in the absence of evidence, the gun inquisition promoted by statists will in the long run do far more harm than good to the already fractured relationships Americans have with doctors. With justification, Americans are increasingly distrustful of the healthcare industry, which is being manipulated into a tool to use against them. Any physician or physician group that agrees to do the government’s dirty work is essentially proclaiming a willingness to be a private sector enforcer for a rapacious bureaucracy that does not know when it has intruded enough into peoples’ lives.

Senator John F. Kennedy wrote in 1960 in Sports Illustrated, “We do not live in a regimented society where men are forced to live their lives in the interest of the state. We are, all of us, as free to direct the activities of our bodies as we are to pursue the objects of our thought.” Maybe not for long. Long gone are the days of JFK and his Democratic colleague Hubert Humphrey, both of whom were openly pro-Second Amendment. What made JFK even more compelling was that he was also vociferously pro-personal responsibility for health; he would be appalled at the way Obamacare turns the engines of state against individuals under the guise of benevolence: “I’m from the government, and I am here to cure what ails you, and I will savage your right to privacy to do it.”

With every twist of the healthcare control knob, the statists try to insinuate themselves and their anti-self-defense, anti-personal responsibility arguments into corners of people’s lives where they do not belong. Education is the ultimate inoculation against harm. Gun owners should continue to view the healthcare system’s evolution with suspicion because, I predict, the Florida experience will repeat in other states, and we are not done with other attempts to gather data about gun ownership through medical means. Ironically, it may be gun owners, with their instinctive understanding of both responsibility and privacy, who end up leading the rollback of a health care industry that is rapidly becoming a swamp where both good and common sense go to disappear.

Vik Khanna is a healthcare consultant, writer, and gun owner in St. Louis, MO. He is an active member of Doctors for Responsible Gun Ownership, a project of the Second Amendment Foundation. His new e-book, Your Personal Affordable Care Act: How To Avoid Obamacare, is available now in the here and at Smashwords.com.