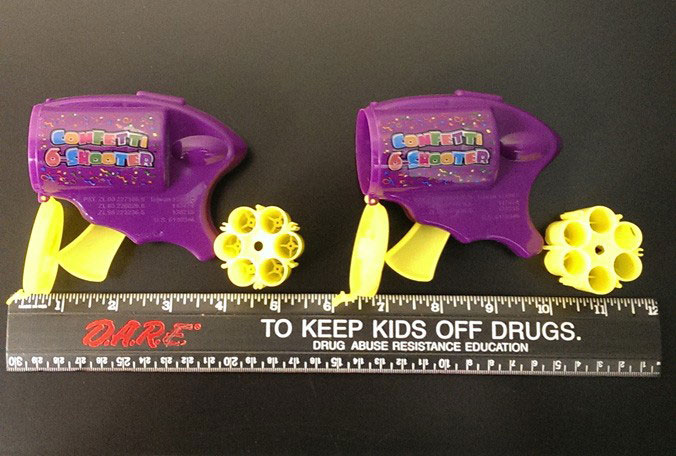 There will be no more celebratory shooting after these six-shooter style confetti guns were confiscated by the local sheriff’s department. (Photo: Flagler County Sheriff’s Office)

Two Florida middle school students caused a bit of commotion on their school bus Wednesday morning, prompting a 911 call about a possible gun, which turned out to only be a purple plastic confetti shooter which a student had brought to school to celebrate a birthday.

“We had two students that brought a party favor, it was a purple plastic confetti gun, but when it went off it did making a popping sound,” Katrina Townsend with Flagler County Schools told a local Fox affiliate.

The confetti guns, which shot out tiny bits of colored paper, were apparently loud and realistic enough to frighten the bus driver enough to call 911 to report a possible gun on board, a move that some said was appropriate and others said was over the top.

“Once he heard the pop, even though it maybe wasn’t exactly the sound of a gun, he just wanted to be precautionary and so he called for backup,” Townsend said, adding, “He did the right thing.”

When authorities arrived on the scene, they were able to determine that there was no immediate threat to the students or the bus driver, but nonetheless the toy favors were confiscated by the Flagler County Sheriff’s Office. The bus then continued on to Buddy Taylor Middle School, but there are conflicting reports about whether or not the two students responsible for the fiasco were removed from the school bus.

Although the school wouldn’t say whether the students, who never acted in a threatening manner, have been disciplined, Townsend indicated that since toy guns are prohibited on school property, disciplinary action of some sort would likely be taken.

“Anytime there is an issue where students are carrying items they’re not allowed to have at school, and toy guns specifically are a prohibited item,” Townsend said, “There is some disciplinary response.”

Parent opinions are split on the reaction to the toy favors.

When shown a picture of the confetti shooters, Juanito Rosario told reporters, “It doesn’t look like a gun to me at all.”

Another parent, Oksana Fadotova, said, “I don’t think police should be involved, it’s my personal opinion.”

And while April Seashock, whose son attends school with the involved students, agreed that calling the police wasn’t necessarily the greatest response, she feels a disciplinary action is still appropriate and would expect the same if it was her own son involved.

“He goes there. If he had something like that I would expect him to get punished for it too,” Seashock said.

Likewise, when My Fox Orlando posted the story to its Facebook page, the overwhelming majority of the more than 150 comments left seemed to disagree with the bus driver calling 911.