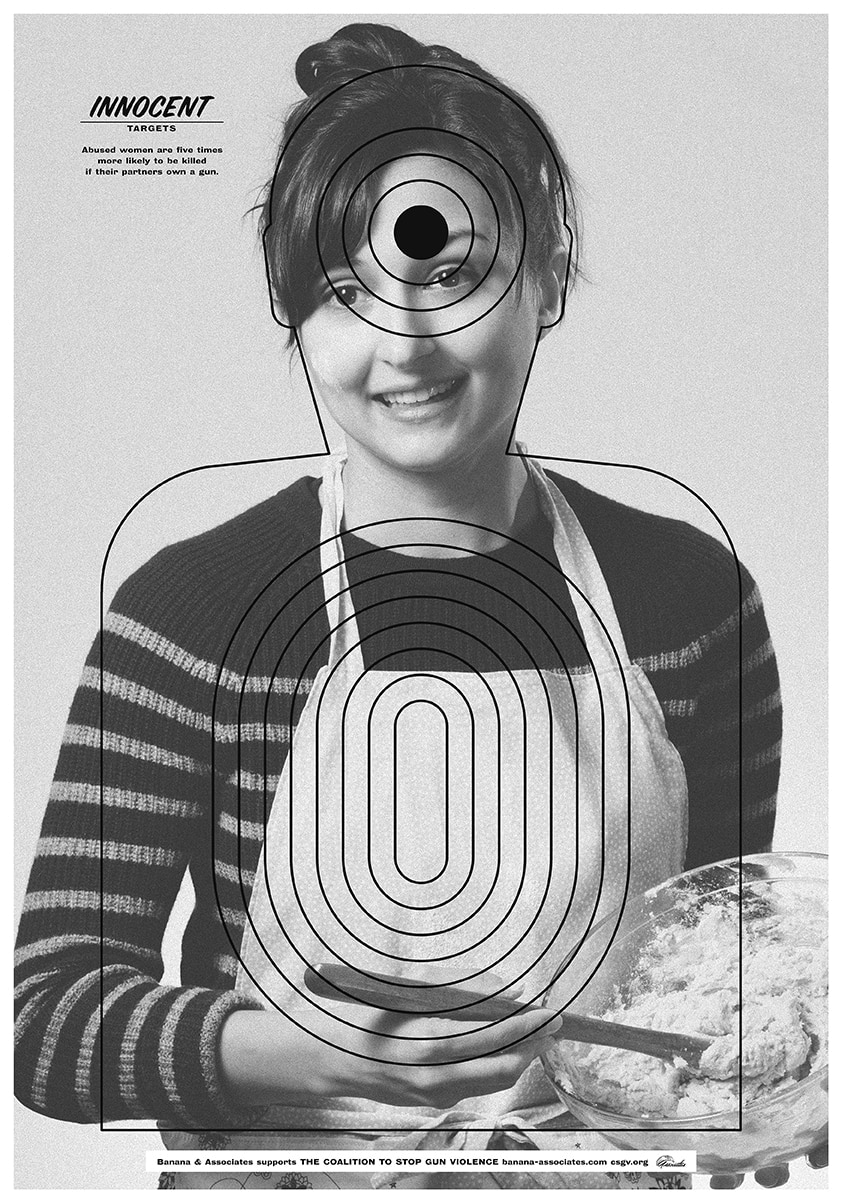 Innocent Target poster with proceeds to help fund the efforts of the Coalition to Stop Gun Violence. (Photo: Banana and Associates)

A group in the UK has developed a series of social commentary target-style posters showcasing pizza delivery guys, women baking and others with proceeds to benefit a gun control organization.

The targets, produced by Banana and Associates of England with poster design by Anthony Burrill and photography by Robbie Augspurger, sell for £25 ($40). However, the images and message behind them are not directed at an audience in the UK but one on this side of the Atlantic.

“There are an estimated 18,000 shooting ranges operating in America today. Many of these shooting ranges sell custom targets featuring thugs, terrorists, aliens and zombies,” reads the lead page of the Innocent Targets website. “The painfully ironic truth is that the real targets of gun violence aren’t these fictional ‘bad guys’ but rather our real-life friends, neighbors, co-workers and children.”

The 10 posters, all depicting unarmed individuals, include campy images of a priest with glasses, a fisherman with a pipe, and a young woman with a lapdog. In all, those portrayed are smiling and seem to pose no threat worthy of drawing fire.

Alongside each image are statements addressing guns in the U.S. with a tie-in to the poster’s theme. For instance on a poster that depicts a balding hipster holding a vinyl record are the words, “Americans produce 75,000 albums each year and 5,500,000 guns.”

Another, portraying a young turtleneck-clad man inspecting a mineral with great joy from behind a magnifying glass reads, “In 34 American states, it’s as easy to buy a gun online as it is to buy a rock.”

Additionally, all posters contain a scroll across the bottom disclosing that the makers support for the Coalition to Stop Gun Violence, which is set to receive any profits from their sales.

However, the gun control group is drawing flak from even its supporters over the posters. When CSGV made a post to its social media account in reference to the latest campaign, negative feedback was quick, with many taking exception to the subject matter.

“Sorry, but if the pro-gun lobby sold these, I would object, and while intent does matter, this is still wrong,” read one commenter. “Additionally, it’s almost certain to be counterproductive, since the gun nuts will point at this and use it to excuse their Obama targets. Seriously, folks. We’re not going to win this by using the tactics of the gun nuts.”

“Considering that good guys with guns stop more bad guys who target innocent victims and save many more lives than are lost to so-called gun violence, I bet they don’t sell many of those offensive targets,” Alan Gottlieb, chairman of the Citizens Committee for the Right to Keep and Bear Arms told Guns.com Tuesday. “None  of the more than 80 million law abiding gun owners will buy them.”