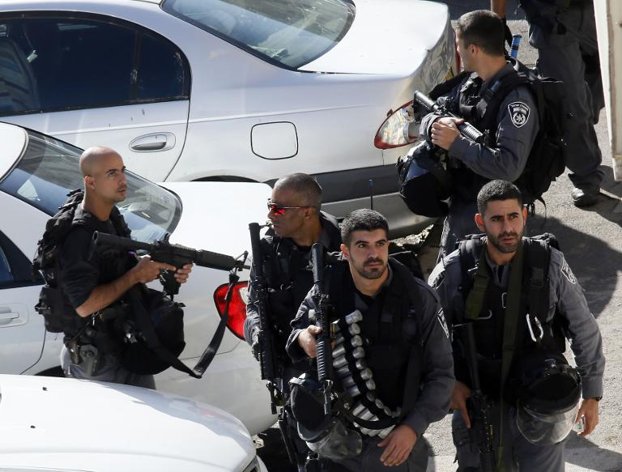 Israeli security personnel walk outside a synagogue that was the scene of an axe attack in the Har Nof neighborhood of Jerusalem, on Nov. 18, 2014. (Photo: AFP)

A Tuesday morning attack at a synagogue in Israel prompted its government to ease restrictions on the carrying of weapons for self defense, Public Security Minister Yitzhak Aharonovitch announced on public radio.

The lifted restrictions apply to anyone already in possession of a license to carry a gun, like private security guards and off-duty army officers, French news agency AFP reported.

Police are on alert and have tightened control of the comings and goings of people in the Palestinian annexed areas of East Jerusalem.

Police quickly responded to the scene and killed the assailants. Authorities were later ordered by Israeli Prime Minister Benjamin Netanyahu to demolish the attackers’ home in the Jabel Mukaber neighborhood of East Jerusalem. Israel largely stopped the practice in 2005 after determining it was not an effective deterrent, CBS News reported.

The region has seen conflict for the past several months with Palestinian protestors throwing rocks at police. Deadly rocket attacks from Gaza also continue to shake the landscape.