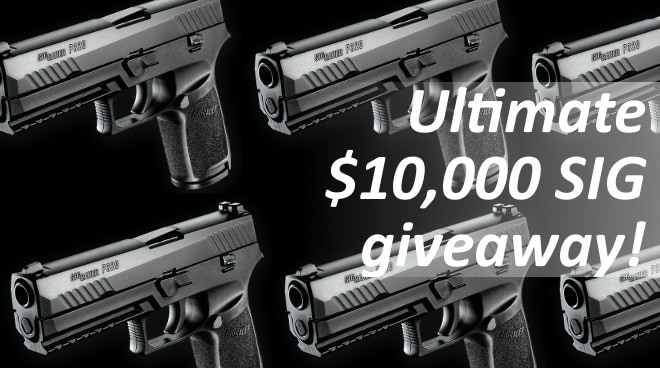 SIG has a lot of things to celebrate this year. The company launched its first-ever striker-fired pistol, the P320, to universal acclaim, it’s brought back some best-loved classics and it still got more up its sleeve with the upcoming MPX and MCX pistols and carbines.

And SIG is celebrating the achievements with a huge giveaway starting with not one, not 10, but 20 P320 pistols with the “Take a Shot” sweepstakes, giveaway and competition.

Ten lucky winners will be drawn at random in the Take a Shot Sweepstakes. Of those 10 winners one will be selected at random to be flown to Las Vegas for the 2015 Shooting Hunting Outdoor Trade Show.

The other 10 will be selected according to merit. SIG is calling for videos showcasing that “The P320 is Epic because … ” with contestants delivering videos that make their case in a minute or less. SIG will select the favorite 10 videos and let fans decide which one is the best.

The person who makes the video with the most votes will also win a five-day, four-night stay in Las Vegas, including airfare, lodging and $500 of walkin’ around money courtesy of SIG. But the contest doesn’t end there. 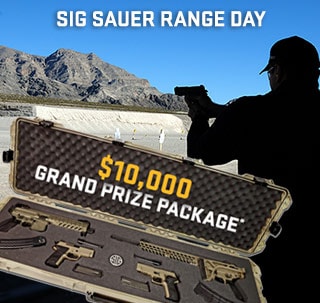 The grand prize winner will have to shoot his way to victory. (Photo: SIG)

The two semi-finalists will face off head-to-head with their P320s at the range for the grand prize package worth over $10,000.

Calling it the “Ultimate SIG Sauer Collection,” it’s hard to argue otherwise, starting with the two most-anticipated guns of 2015, the MPX and MCX.

The grand prize includes one MPX PSB 9mm pistol, and one MCX Carbine chambered for 300 AAC Blackout. Both are piston-driven guns that are inspired by, but not completely compatible with, AR-15s. They don’t require a buffer assembly and have folding stocks, or in the case of the MPX, a folding arm brace.

Both the MPX and MCX will come with two extra magazines.

It doesn’t stop there. The grand prize includes two handguns, an M11-A1 and a MK25, both in flat dark earth. Both are special edition P-series pistols based on military models. The MK25 is a commercial variant of the full-size MK25 used by Navy SEALs and the M11-A1 is an updated version of the M11, SIGs compact used by special units throughout the U.S. military.

Each pistol also comes with an extended, threaded barrel. And to make sure that the winner goes home with everything they need to head straight to the range SIG is including a case each of 9mm and 300 BLK ammo.

All this comes in a custom Pelican case and to cover every last base, SIG will give the grand prize winner one SIG Sauer morale patch for good measure.

This is a dream package of SIG hardware so if you think you’ve got what it takes to win it, be it skill or luck or both, head over to the Take a Shot sweepstakes and contest page to enter today. Let’s see those videos and good luck to all.