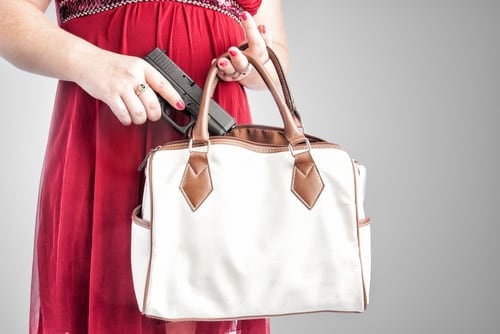 Your spouse’s purse is not a good place to conceal your gun.

How you carry a concealed gun tells a lot about yourself, especially if you’re not concealing your gun when you should be.  When it comes to concealing firearms, being lax about it can raise some serious questions about your gun competence.  When you’re out in public, it’s best if other people don’t see your gun for a number of reasons.

Recently my wife and I went indoor skydiving.  One guy in particular stood out to me.  He was also there to go skydiving.  When he walked in with his wife, I immediately noticed a firearm on the right side of his hip.  He wore a tight T-shirt, so his gun was printing.  His shirt wasn’t tucked in and it wasn’t long enough to cover the barrel of his pistol either.  His outside the waistband holster even allowed me to see his aftermarket fiber optic front sight.

I walked up to him, introduced myself and very kindly (and quietly) mentioned that I noticed his gun.  I told him it’s great that he’s a concealed carry holder and then casually suggested that it was probably a good idea for him to go put the gun in his car.  The facility had lockers, but they didn’t have locks on them; and frankly, there are times when the gun needs to be locked up (e.g. indoor skydiving).

After I suggested that he put his pistol in his car, he responded, “I’ll just put it in my wife’s purse.”

At this point, I became concerned.  First, about this dude’s ability to shoot.  My assessment was if he wasn’t competent enough to adequately conceal his gun, he probably couldn’t shoot that well either.

Second, and along those lines, I wondered about his knowledge of when to draw, point or shoot at someone in a situational event.  Would he be too fast on the gun or too quick on the trigger?  Could he discern problematic situations well enough to make rational and reasonable decisions under stress?  Would he consider his backstop and beyond if he pulled out his gun in a lethal situation?  I didn’t think anything would happen there, but if something did, would my wife and I get shot as innocent bystanders?

Third, I was concerned about his thinking.  Did he want everyone to see he had a gun?  If so, what kind of emotional stability did he have?  What kind of message did he want to send if he didn’t care if others saw his gun?

Finally, my biggest concern was over him putting his gun into his wife’s purse.  Why? Because it shrugs at the responsibility that every CCW holder has to retain their weapon. And also I could just picture this guy diving for his wife’s purse, putting his finger on the trigger as he pulls his gun from the holster, muzzling the crowd and maybe even negligently shooting someone given the right set of circumstances.   The headline: “Concealed pistol owner shoots indoor skydivers; politicians say time to review CCW law.”

I walked away and watched him carefully.  I warned my wife, “Watch him closely.”  If he didn’t happen to muzzle anyone, I was still certain that he’d take off his gun, without a holster covering the trigger, and then place it in his wife’s purse with the trigger unprotected.  Some lipstick or a set of keys inside the woman’s purse could shuffle around and…BAM!  Another headline.

When it comes to firearms, I like being in charge.  I’m pretty serious about firearms safety.  But, I wasn’t in charge of the building or the event.  So, I went and told someone who was.

Pretty soon a nice lady came up to me and said, “Sir, I understand why you’re carrying a firearm, but would you please…”

“Oh,” she said, realizing she was speaking to the wrong person.  Thankfully, this responsible and professional woman went and corrected the problem.  It was a good thing that she was pro-gun, too, or else a lot of bad things could have happened—perhaps another anti-gun headline.

The guy soon walked outside and came back a little later without a gun on his hip.

The next time you’re out and about and notice a gun toter not carrying correctly, beware.  Not only does showing a concealed gun make most people worried, but also it could cause mass chaos and panic, get the cops called on you, and make gun haters hate guns more (which could influence judges and politicians to make decisions banning concealed carry in certain areas or altogether).

But, most assuredly, realize that exposing your gun when it ought to be concealed will make people like me question your firearm competence.