Florida: Vote this week on using suppressors in hunting 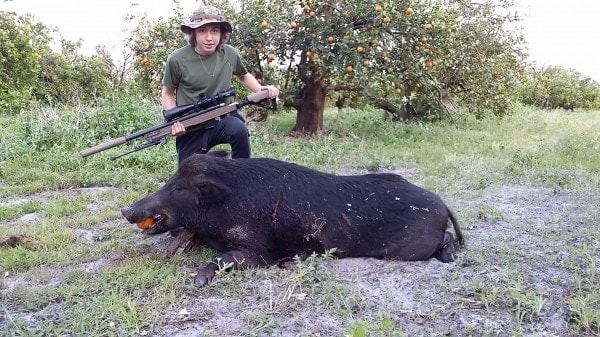 Currently suppressor-equipped hunters in Florida, such as this one, can only take feral hogs on private land. A proposed rule change to be voted on this week may greatly expand hunting rights in the state. (Photo: AAC )

The Florida Fish and Wildlife Conservation Commission will decide Thursday on repealing the state’s 1957 ban on the use of sound suppressor devices by hunters in the face of opposition from gun control advocates.

The seven-member commission will vote at its semi-annual public meeting in Key Largo on a proposed rule change to remove the prohibition on the use of noise-suppressed (i.e., silencer-equipped) rifles and pistols for taking deer, gray squirrels, rabbits, wild turkeys, quail and crows. The rule change was proposed earlier this summer and evaluated at open meetings.

“There’s a common misconception that suppressors make the gun completely silent, and that’s really far from the truth,” Diane Eggeman, director of FWC’s division of hunting and game management, told the Orlando Sentinel.

Eggeman is recommending the state adopt the new rule as neighboring states such as Louisiana, Georgia and Alabama have made similar changes in recent years.

According to data from the American Suppressor Association, 32 other states besides Florida allow hunting of game animals, with an incredible 10 of those only updating their laws in the past three years. The group extolls the benefits of suppressor use to include hearing protection and better accuracy while contributing to increased situational awareness, and are thus simply safety devices.

Banned for most game species since August 1957, current law allows that hunters in the Sunshine State can only take pest animals such as armadillos and feral hogs with suppressed rifles and handguns on private land. The Bureau of Alcohol, Tobacco, Firearms and Explosives as of March 2014 listed 39,613 registered suppressors in Florida, with only two states, Texas (86,579), and Georgia (43,958), having a greater number of devices on file.

However, not all in the state are on board with the proposed increase in quiet time for Florida’s sportsmen. Besides the national gun control group, local efforts are underway to derail the rule change. Recently, various chapters of the League of Women Voters in Florida, which has been increasingly active in gun control efforts across the state, began organizing to oppose the measure.

“Let’s start standing up to reckless gun enthusiasts. It’s time we say enough is enough!” read a post on social media advertising a meeting to prepare a campaign against the change. “Florida’s beautiful woodlands will soon become dangerous for hikers and nature lovers looking for respite.”

Gun rights groups in the state are supporting the commission’s proposed rule change.

“The Commission is merely removing arcane language that was inserted 57 years ago,” Marion Hammer, president of the Unified Sportsmen of Florida and past president of the National Rifle Association, explained to Guns.com in September. “Throughout that 57-year period, noise suppressors have remained legal for target shooting, plinking, and other lawful shooting activities without producing the killers and poachers that the ill-informed claim will result from allowing hunters to use suppressors.”

The FWC Commission will convene to vote on the change at its Nov. 20-21 public meeting in Key Largo and is accepting online comments as well.