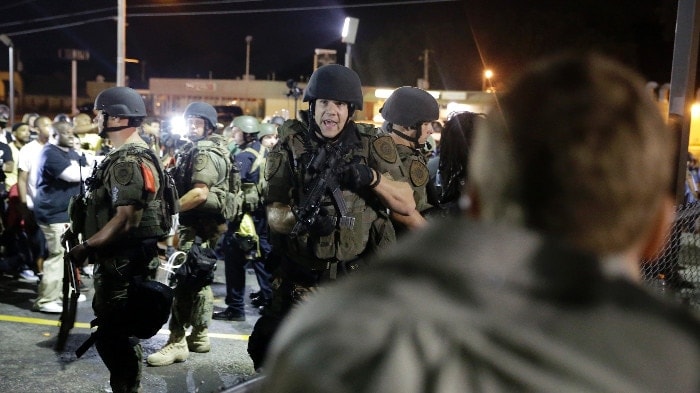 Department of Defense officials told Congress last week that while they support the surplus program that provides military equipment to police, they are pursuing changes.

The DoD program, officially the Law Enforcement Support Office, but better known as the 1033 Program, was set up in 1997. Run by the U.S. Army, it allows federal, tribal, state and local law enforcement agencies to request excess equipment from the military’s stockpiles. The items available range from vehicles and aircraft, to office equipment and weapons.

Images of camouflaged peace officers operating from armored vehicles following the mayhem triggered by the police shooting of a black teen in Ferguson, Missouri, this summer led to widespread calls for review of the program.

As reported by BuzzFeed, senior members of the DoD responsible for 1033 told a committee of lawmakers on Capitol Hill that changes are already in place.

“These changes include notifying the Department of Justice on all law enforcement agencies’ applications for enrollment in the program, on all suspended law enforcement requests for inclusion back into the program and on allocations of weapons, armored vehicles and aircraft,” Vice Admiral Mark Harnitchek, director of the Defense Logistics Agency, under which the 1033 Program falls, told the House committee last Thursday.

Alan F. Estevez, the Assistant Secretary of Defense for Logistics and Materiel Readiness elaborated in his testimony by defending the program overall, citing that it has paid off in times of natural disaster such as in Superstorm Sandy in 2012.

“It is a good use of taxpayer dollars,” said Estevez, who has recently resigned from his post, and is pending replacement once a Presidential nomination to his position is approved.  Estevez was only approved by Congress himself last October.

Despite Estevez’s insistence, a number of questionable acquisitions, such as when a Tennessee sheriff obtained 161 firearms for his 31-deputy department through the program, are gaining attention.

In recent weeks details such as a coroner in Arkansas who signed up for a surplus Humvee, M16 rifle and M1911 handgun have come to light. In Wyoming, the state Livestock Board received no less than seven surplus World War II era pistols, even though its agents, tasked with investigating cattle theft, are already issued Glock handguns.

Worse, agencies are complaining that the Pentagon makes it difficult to return unwanted items. As reported by Mother Jones, the Chelan County Sheriff’s Department in central Washington has been attempting to give back their three armored vehicles since 2004 without luck.

Meanwhile civil rights groups are taking exception to the continued operation of the program while it is being reviewed.

In late October, the American Civil Liberties Union and more than 35 other organizations appealed to Secretary of Defense Chuck Hagel to declare a moratorium on the 1033 Program until the various reviews by Congress and the White House are concluded.

“A halt on transfers would enable documenting of equipment transfers, both from the Department of Defense and among local law enforcement agencies, accounting of inventory, and otherwise assessing the scope and function of the program,” read an open letter to Hagel signed by the groups.

In anticipation of the grand jury’s decision on whether or not to indict Ferguson police officer Darren Wilson for the shooting death of Michael Brown and the fear of subsequent violence, Missouri Gov. Jay Nixon issued an executive order Monday declaring a state of emergency and activated the National Guard to remain on standby.

As such, more military equipment may soon be on display in Ferguson’s streets.