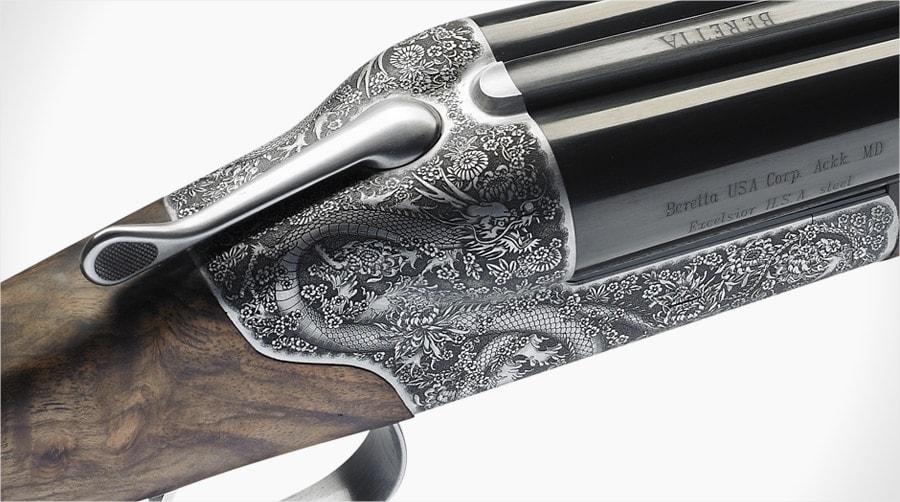 The stock flows over the tang eliminating the sharp lines of the receiver. (Photo: Beretta)

Acclaimed designer Marc Newson has made a career of integrating his artistic style — biomorphism — to commercial products by a long list of manufacturers including Airbus, Apple, Dom Perignon Ford, Lockheed, Nike, Pentax and most recently, Beretta, to transform their industrial design to entirely new heights as works of art.

Beretta unveiled the new 486 by Marc Newson, based on its 486 Parallelo, at a London event and the special edition side-by-side is nothing short of a masterpiece. Nearly everything has been re-imagined with new form and function, except the barrels, which Beretta stands by fiercely as the world’s best.

At the same time, Beretta and  Ancarani Studio have put together a short film, “Human Technology,” that showcases the technical precision and Old World craftsmanship that goes into every Beretta shotgun celebrating “the uniqueness and the distinction of every Beretta premium gun”.

“This movie by Ancarani Studio, under the creative direction of Paola Manfrin, reveals through the minutia of the manufacturing process, the genesis of a luxury Beretta shotgun. A poetic journey through sterile robotic rooms is blended with five centuries of Beretta’s history, culminating in the final assembly by the gunsmith, ever the wise guardian of the art of manufacturing.”

Enlarge for a high-resolution look at the 486 by Marc Newson and its features. (Photo: Beretta)

But the level of detail that goes into every 486 by Marc Newson is another world apart, to the point where it is almost a new shotgun entirely.

The receiver has been heavily re-worked to highlight the new engraving pattern and minimize hard lines and other signs of machined parts. The result is a completely organic “edgeless” rounded action that flows all the way around the receiver.

Gone is the screw affixing the trigger guard to the receiver. Instead, the trigger guard and receiver are dovetailed to slide together without having to chop across the engravings. Eliminating sharp lines is a hallmark of Newson’s work and it shows here with this small but thoughtful change.

The engraving pattern is original to the 486 by Marc Newson and pays tribute to Asia, original home to the pheasant, with dragons flying around the receiver on a backdrop of flowering vines. The pattern, while very traditionally-styled, is precision laser-engraved into each receiver.

Newson calls this the “Woodbridge” as the stock streams over the hidden tang. The island-like selector is the only part of the tail that rises above the stock just in front of the checkered grip.

The forend has been flattened and minimized to make the 486 by Marc Newson feel slender and streamlined in the hand. This also allows the forend to flow directly into the front of the receiver, essentially transforming the handguard into an extension of the action.

While some of these changes are functional, some are more functional than others. One major change is to the trigger group which employs an Anson & Deeley type of lock which uses flat as opposed to coil springs. Like with a 1911, flat springs promise a faster lock time and a glassier break.

One element of the 486 by Marc Newson is left 100 percent Beretta, and that’s the barrels.

The shotgun uses Beretta’s OptimaBore barrels designed for hard use while still achieving the line-free look of the classiest side-by-sides. The cold hammer-forged barrels are assembled with Beretta’s Triblock which eliminate welding lines and the barrels are hand-polished for a perfect, seamless finish.

The end result is a functioning work of art. Despite the fine checkering and elegant tracings this is still a hunting shotgun, and while we doubt they’ll see a lot of mud in the field, they’re built to shoot and last for generations of use and will be a shining star at any range.

Ultimately, Beretta is familiar with both extremes of human technology.

For more about these and other Beretta shotguns, visit the Beretta website.