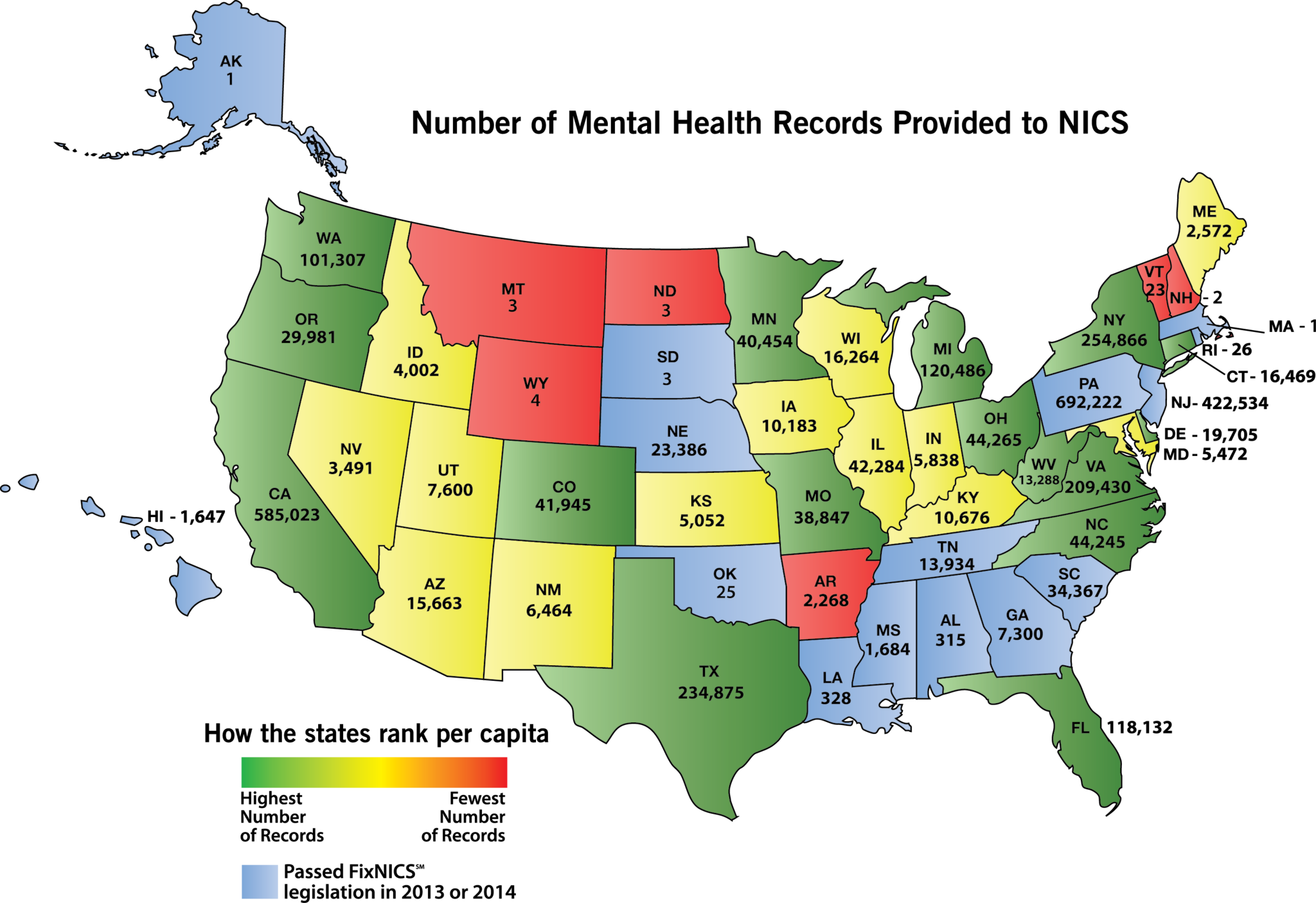 While the numbers of mental health records that prohibit gun possession forwarded to the FBI have tripled since 2011, not all states are equal in the number of submissions. (Photo: NSSF)

According to FBI data released this week, the number of firearms prohibiting mental health records submitted to the federal background checks database from the states has climbed 10 percent in six months.

The data shows that 3,704,037 active records of those adjudicated on mental health issues that would prohibit legal firearms possession are cataloged in the Federal Bureau of Investigation’s National Instant Criminal Background Check System as of Oct. 31, an increase from 3.4 million in April.

When broken down by state submissions, the largest increases can be found in three states that have all recently strengthened their record reporting laws – Nebraska , South Carolina and Minnesota.

The three states with the lowest number of submissions on mental health issues include gun-strict Rhode Island and Massachusetts and gun-liberal South Dakota, all of which currently have fewer than ten prohibiting health records on file with NICS. However all three of those have recently passed reporting legislation to address missing records moving forward.

Taking credit for documenting this increased reporting is former New York Mayor Michael Bloomberg’s Everytown for Gun Safety organization. The group has published an extensive Fatal Gaps report detailing the disparity between the states in submissions.

“Significant progress has been made all over the country to get missing mental health records into our background check system” explained Everytown representative Erika Soto Lamb to Guns.com. “Look at South Carolina, where a record reporting law passed last year and already at least 136 gun sales to dangerously mentally ill individuals have been blocked. We hope the nine states that have still submitted fewer than 100 records follow South Carolina’s lead, because it only takes one gun reaching dangerous hands to devastate a community.”

The 3.7 million mental health records held in the NICS index amount to just under a third of the 12.6 million overall prohibiting reports. This figure dwarfs the 1.7 million felons and 465,000 known fugitives from justice in the database. The number one category, accounting for half of the records, is for the 6.2 million known individuals classified as illegal/unlawful aliens.

Since 2011, the number of mental health prohibiting records submitted from the states to the federal database has tripled. For this, the firearms industry trade group, through its FixNICS program that aims to improve the database by submitting all records establishing an individual is a prohibited person, is taking credit.

“As our updated report demonstrates, it is the firearms industry, through the NSSF’s FixNICS campaign, that is directly responsible for the marked improvement in the reporting of disqualifying mental health records to NICS by the states,” Larry Keane, National Shooting Sports Foundation (NSSF) senior vice president and general counsel, told Guns.com Thursday.

Keane contends that it is the gun trade group that has alone paid for lobbyists, helped draft the legislation, and testified before state legislatures to improve records submissions to keep legal guns out of the hands of those who should not have them, not the Bloomberg organization.

“We worked with the mental health community and law enforcement to write the legislation and pass the bills that changed policies to fix the problem, while at the same time fully respecting the Second Amendment rights of gun owners,” Keane said. “The former mayor may be … a billionaire but he does not put his money where his mouth is. He runs off at the mouth and falsely takes credit for our accomplishments that have made our communities safer.”