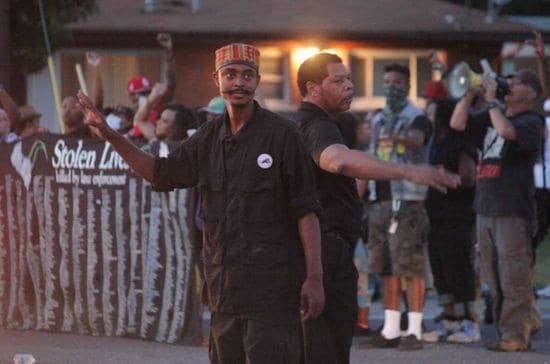 Federal agents and local law enforcement have arrested two men, believed to be members of the New Black Panther Party, near Ferguson, Missouri, in connection to illegal bomb making and weapons charges.

The two men, Brandon Orlando Baldwin, also known as “Brandon Muhammad,” and Olajuwon Davis, aka “Olajuwon Ali,” are facing one count each in connection with making false statements during a firearms transaction, according to court documents. The two attempted to purchase a pair of Hi Point Model JHP .45 pistols from a Cabela’s sporting goods retail outlet in Hazelwood, Missouri, earlier this month.

According to court documents, Baldwin and Davis lied about the actual intended owner of the firearms, with Baldwin attesting to the fact that he was purchasing the guns for himself. In fact, the government claims the firearms were being purchased on behalf of another person, commonly referred to as a straw purchase. Buying a gun for someone who is prohibited is a federal crime punishable by up to 10 years in prison and a fine of up to $250,000, according to the Bureau of Alcohol, Tobacco, Firearms and Explosives.

The arrest comes on the eve of the outcome of a grand jury inquiry into the Aug. 9 shooting death of Michael Brown by Ferguson Police Officer Darren Wilson, who is rumored to be contemplating resignation.

As reported by the St. Louis Dispatch, local and federal authorities executed search warrants on two residences that yielded information that Baldwin and Davis, identified by authorities as members of the New Black Panther Party, were planning to use the firearms in conjunction with undisclosed attacks on police and the public.

In the documents maintained in the archives of Washington University in St. Louis related to the recent Ferguson events, a chapter affidavit of the New Black Panther Party-St Louis Chapter, lists Olajuwon Ali as the chairman of the organization. Ali’s Facebook page likewise contains numerous references to the organization including links to videos, arrest reports, literature and protest materials.

A CBS News report Friday links the same two men to the acquiring of explosives to illegally produce pipe bombs. The improvised explosives were to be used during upcoming protests.

This is not the first reported instance of possible violence by extremist groups in future conflict over Ferguson. Earlier this week, hacktivist collective Anonymous took over the Ku Klux Klan’s Twitter account following alleged threats of violence by the white supremacist group against protesters in the embattled Missouri city.