Couple tied up during home invasion, gets free and fatally shoots suspect (VIDEO) 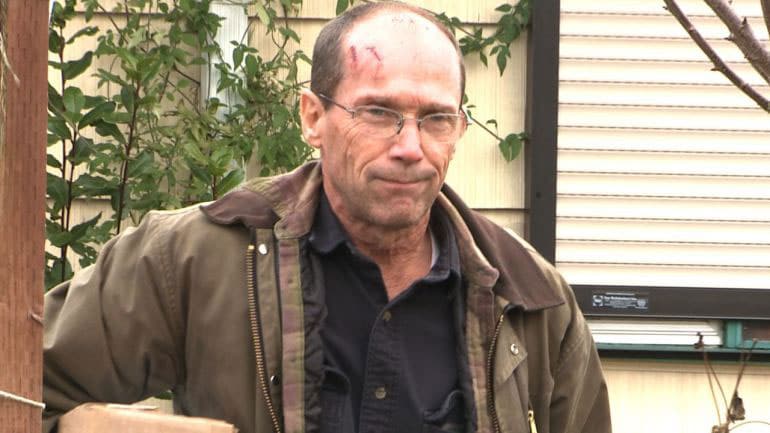 “We are a little shaken up, but we are doing fine,” the victim, whose face was still visibly injured, told reporters the day after the home invasion. (Photo: Q13 Fox)

A courageous Washington couple fought back against three suspects during an attempted robbery at their Lakewood home Nov. 18, which ended in authorities finding what was believed to be the body of one of the suspects dumped some 20 miles away.

After knocking on the door of the victim’s home, the three suspects, one of who was armed with a knife and another armed with a gun, forced their way into the home.

Harry Lodhollm, who was home with his wife at the time, told a local Fox affiliate, “They kept on saying, ‘Where’s your weed? Where’s your money? And where’s your gold?’ We don’t have any of those things.”

The suspects tied up the couple, pistol whipped the man, cut the woman and proceeded to ransack their home searching for cash and valuables. But at some point during the robbery, the suspects stepped outside and that’s when Lodhollm made his move.

Lodhollm first freed himself, then untied his wife and closed and locked the door behind the suspects. The couple then ran into a back bedroom – where Lodhollm kept his gun. Rather than the retreating, the suspects tried to get back inside the house, a foolish move that would later prove fatal.

Lakewood police spokesman Chris Lawler said Lodhollm gave the suspects fair warning before they forced their way inside for a second time.

“He said, ‘Don’t come in or you will be shot!’ Lawler said. “They had a chance to retreat and they didn’t.”

Police received a 911 call from Lodhollm about 9:30 p.m. and when officers arrived they found evidence that one of the suspects had been shot.

A little more than an hour later and as officers were continuing the investigation at the home, they received another 911 call from an individual at an apartment complex about 20 miles away. According to the caller, she heard a gunshot and saw a man fall to the ground before a car sped away.

When officers arrived, they couldn’t find anyone who had either placed the call or witnessed anything. Authorities now believe the story was fake and the call was placed in an attempt to get medical aid for the man. However, the man, who had been shot twice, was pronounced dead at the scene. Authorities also believe that the man who was dumped at the apartment complex was the same man responsible for the earlier home invasion and shot by Lodhollm.

The man is said to be either 19 or 20-years-old, but his name has not been released. The remaining two suspects are still at large and are only described as black males with a medium build, about 5 foot, 10 inches tall and wearing dark clothing with knit caps. Their faces were all covered with masks.

Lodhollm and his wife were treated for their injuries, which could have easily been worse, and are said to be doing okay.

Lawler confirmed that the incident appears to be completely random but it’s possible that the suspects simply targeted the wrong address. He also called the couple courageous and said that in spite of the terrifying events, they remained calm and made good decisions.