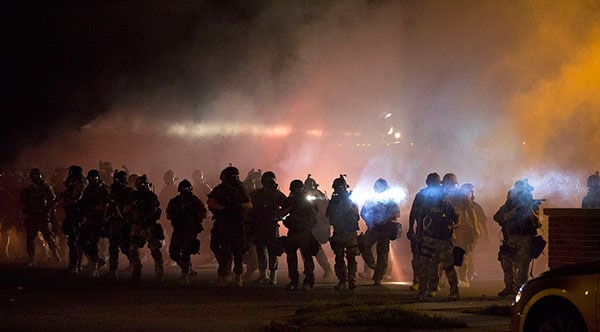 A grand jury did not indict officer Darren Wilson for the fatal shooting of Michael Brown.

Any time prior to Aug. 9 few people ever heard of Ferguson, Missouri, let alone the Ferguson Police Department. That quickly changed when Officer Darren Wilson crossed paths with 18-year-old Michael Brown, an encounter that left Brown dead on the street. But what happened in Ferguson that day could well have happened in most any community in the United States. The death of Brown left a divided community, and, in some ways, a divided country. But for police departments and law enforcement agencies across the country, there are a myriad of lessons to be learned.

First of all, most things are seldom as they first seem. Ask any seasoned police officer, and he or she will echo that sentiment. Just moments prior to the incident that took his life, Brown had been involved in a strong-arm robbery in a nearby convenience store, one that was captured on the store’s video camera. But, according to the Ferguson police chief, Wilson was not aware of the robbery, or of Brown’s involvement, prior to crossing paths with him. Wilson apparently made contact with Brown, simply because Brown was walking in the middle of the street. Had Wilson known of Brown’s apparent involvement in the robbery, we can only imagine that this information would have altered the exchange between the two.

Secondly, most of the follow-up investigation indicates that Brown aggressively engaged Wilson in a violent struggle within the confines of the officer’s patrol car.  It is believed that Brown was attempting to take possession of the officer’s pistol when Wilson fired the first shot.

The third thing to consider is the fact that Brown’s body lay in the street for a protracted period of time in full view of a great many onlookers. That obvious appearance of insensitivity on the part of the police would not be ignored, and, in hindsight, it would seem obvious that they should have quickly cordoned off the area and erected a forensic screen.

Fourthly, so much has been made about the high-powered long guns and the armored police vehicles that descended upon the town once riots started to break out. While it is this writer’s opinion that all of that equipment and much more is needed in today’s law enforcement inventories, the frenzied images portrayed by a largely liberal news media showed officers in turrets pointing at protestors over and over for days on end, and that only exacerbated an already out-of-control situation. It has also unfortunately led to the whole 1033 program (the re-purposing of military equipment) being called into question.

Fifth, for the police, it is always best to under-promise and over-deliver. When Missouri State Highway Patrol Capt. Ronald Johnson arrived on the scene, he promised an end to the tear gas, but it was a promise that could not be kept. His arrival on on the streets of Ferguson and the assurances he made, most of which were apparently ill-thought-out, were mistakes on the part of law enforcement.

The sixth issue to consider is that we, as U.S. citizens, must demand that police agencies think outside of the box, and be prepared for the unexpected. Part of that thinking should have been the prior development of large community alliances with the police department. Build bridges with the community, do not carve out moats.

The seventh and last issue that I bring up here, is perhaps the expanded use of body-worn video equipment on the part of police officers. Technology may well indeed have made a difference in this situation. The use of a small, POV device worn on the officer’s front vest, may have actually cleared Wilson immediately of any wrongdoing or could have been the convicting factor in his prosecution. Either way, one wonders if it would have staved off all the mindless violence we continue to see.

Now, we don’t have long to wait. The fate of Wilson is in the hands of the grand jury. When he shot and killed Michael Brown on August 9, 2014, the town erupted into violence. Rioting and looting broke out. Senseless violence perpetrated against completely innocent people became the norm.

Attorney General Eric Holder waded into the fray, along with President Obama. Instead of having a calming influence, however, their involvement only seemed to push the protesters and rioters into greater acts of defiance and violence. Obama’s dismal record of immediately siding with the Trayvon Martin supporters in Florida, or the Harvard Professor Henry Louis Gates Jr. case against the Cambridge, Massachusetts police, and others, seem more like knee-jerk reactions rather than well thought out considerations. Folks like Al Sharpton and Jesse Jackson once again demanded to be heard. It’s just my thought, I know, but where are those good people and their voices when there are acts of violence against white people?

The grand jury may decide that there is not enough evidence to have Officer Wilson prosecuted for any crime at all, that his actions were a matter of self defense. If that is the decision, we can fully expect a whole new round of unbridled violence. On the other hand, if they find that there is indeed enough evidence to prosecute the officer, it will be viewed as vindication for the prior acts of the rioters and looters, and then it is likely that there will still be more violence. Time will tell one way or the other, but time is quickly running out.

There will always be a rush to judgment, and, when it comes to a racial divide, while all of that should be well behind us, it is not.