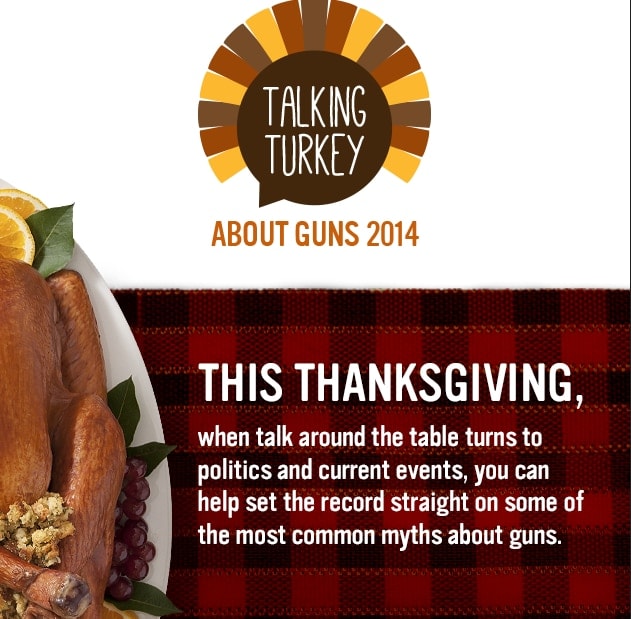 Former Mayor Michael Bloomberg’s Everytown for Gun Safety group is providing its members a gun control flashcard of sorts, packed with figures and facts, to use around the dinner table this holiday.

The collection of data, presented in a bullet-point format, is designed to provide advocates quick information to draw from in conversation with seldom seen friends and relatives over the upcoming Thanksgiving feast. Termed “Talking Turkey About Guns, 2014” the resource presents itself as a myth buster of sorts, for instance, taking on claims from the National Rifle Association that more guns in more places make us all safer.

“Even though good manners says we’re not supposed to talk religion or politics, we all know that sometimes the conversation at the Thanksgiving table gets taken over by a family member or friend with strong opinions and shaky facts,” Erika Soto Lamb, communications director for Everytown told Guns.com Monday.

“For that reason, we thought it would be helpful to provide gun safety supporters with this handy guide for busting some of common myths about guns and to help set the table straight this year,” Lamb said.

According to Talking Turkey, the information presented contends that women are five times more likely to be killed by an intimate partner when firearms are present, Americans are 20 times more likely to be murdered with a gun that people in other countries, and 92 percent of Americans support expanded background checks. The infographic, although garnished with images of turkey and pumpkin pie, does not cite its sources.

Further, it does not have Everytown’s name or the monikers of groups under its umbrella such as Mayors Against Illegal Guns, or Moms Demand Action. The only sign on the downloadable image, set up for quick insertion into social media feeds, that Everytown may be responsible for it is a modified version of the organization’s three-striped logo, stripped of wording and hidden at the bottom of the layout.

The Bloomberg Talking Turkey campaign actually predates the birth of Everytown. In 2013 Mayors Against Illegal Guns distributed a similar flyer under the same name. This prompted the National Rifle Association to fire back with a “Bloomberg is full of stuffing” rebuttal last holiday season.

The figures at the heart of the current infographic, however, have been discredited by Dr. John R. Lott, Jr., an economist specializing on guns and crime. Lott, through his Crime Prevention Research Center, has long taken on the Bloomberg group’s statistics calling them “typical misinformation.”

Lott told Guns.com that the latest Everytown effort has some, “Horrible errors in these claims,” pointing out, for instance, that the classification of “intimate partners” included in the figures about violence towards women also encompasses prostitutes and their customers.

“If you want to ask about the real risk factor women should be careful of men with violent criminal records, not ownership of guns,” Lott said.

Further exceptions to the Talking Turkey infographic Lott took include taking issue with the contention that concealed carry does not make people safer and flawed assumptions on comparing murder rates with other countries.