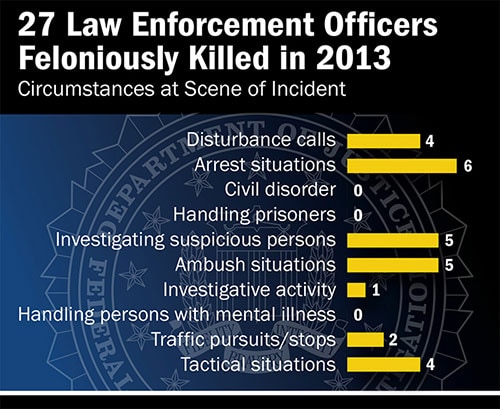 The report breaks down the details of felonious deaths, accidental deaths and the overwhelming number of assaults that occurred.

Twenty-seven, or a little over one-third, of the deaths of police officers in 2013 were the direct result of criminal acts, down almost half from 49 in 2012. The deaths occurred over 16 states across the country, with the bulk – 15 – occurring in the South. The average age of the officers killed was 39, serving in law enforcement for an average of 13 years.

Officers who died as the direct result of criminal acts were most often killed during arrest situations, investigating suspicious persons or circumstances or an ambush, followed by tactical situations and disturbance calls. Two officers were killed while conducting traffic pursuits/stops, and one was killed while conducting investigative activity. 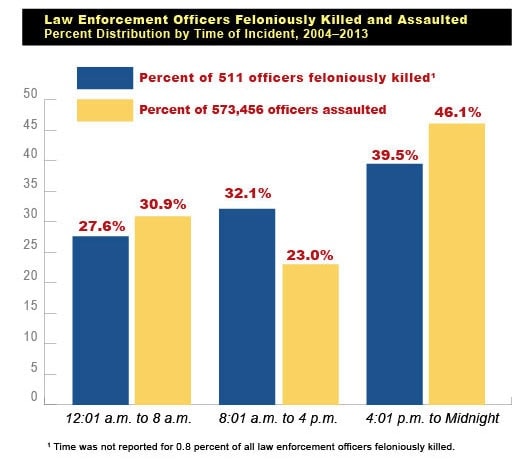 Officers going into the night shift were more likely to be killed while on duty. (Graphic: FBI)

Of the 27 officers killed by felonious acts, all but one – who died after intentionally being struck with a vehicle – were shot. Handguns were the most frequently used weapon, followed by rifles and shotguns. The majority of the suspects also had a prior criminal history.

Forty-nine, or about 64 percent of officers killed while on duty last year died from accidents, down by one from 2012. Most of those deaths – 23 – were the result of injuries sustained from car accidents. However, an additional nine officers died after being struck by vehicles, four died in motorcycle accidents and one died in a plane crash, bringing the total transportation-related deaths, excluding those hit by vehicles, to one more than the felonious deaths.

Again, the majority of the accidental deaths – 63 percent – occurred in the South. 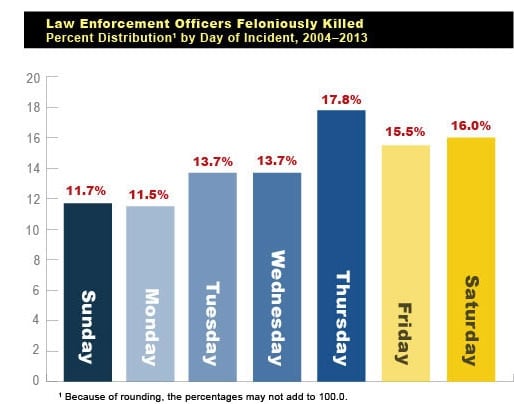 Most dangerous days of the week for police officers while on duty. (Graphic: FBI)

Additionally, officers experienced a total of 49,851 assaults while on duty last year, 29 percent of which resulted in injuries.

Officers were most likely to be assaulted while responding to disturbance calls and nearly 80 percent of the time assailants used their hands, feet and fists as weapons. Other miscellaneous weapons were the second choice of assailants, followed by firearms and knives or other cutting instruments.

According to the Bureau of Justice Statistics, there are nearly half a million law enforcement officers across the country.