The public debate on police oversight through technology is no small matter.  Currently, a company named Yardarm has designed technology that will revolutionize police work, but only if it can make that big break into the law enforcement market.  And even so, how far are we willing to go when such advancing weapon-tracking technology may also soon infringe upon the rights of citizens?

An electronic sensor—termed “firearm telematics“—designed to go into the hollow space of a gun (e.g. the heel of the Glock or into a handle of an AR) has the capacity to do extraordinary things.  This tiny micro-tracker can show where the gun is, when the gun is fired, how many rounds are fired, which way the firearm is pointing, and if it’s even drawn from the holster.  That’s a whole lot of knowledge, and deserves a second, a third and a fourth look from gun-owners.

I see some potentially useful techno-tools for the law enforcement mission here.  One of biggest I see for law enforcement purposes (and coming from a long LE background) is that if an officer discharges their weapon (or if a suspect disarms and fires an officer’s weapon) 911 dispatch can immediately know about it and send back-up.  The GPS tracker is nice in that if an officer needs immediate help and is away from his squad car on a walking foot patrol, or if the officer is injured or uncertain about their exact location, the GPS will also let dispatch (and thus other officers) know where they are.

Since the advent of mobile computers and other electronic-aided technology, most police cars have had laptops and mapping software in them for over a decade.  GPS has been installed either in the squad cars, in the computers, or both, allowing officers to be tracked in real-time.  But not until now has GPS been proposed for use in an officer’s firearm, tracking their actual location.  On one hand, that’s quite ingenious. 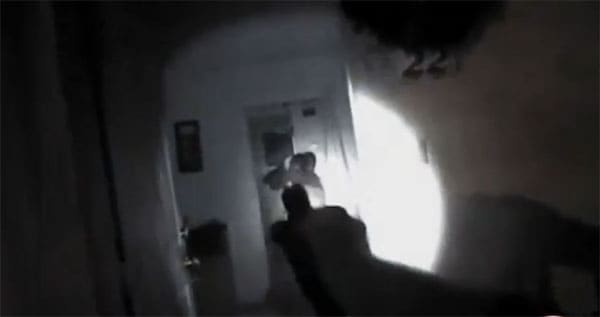 Police departments across the United States have begun incorporating new tracking technologies such as bodycams and GPS devices.

I recall when GPS devices were first installed in squad cars and hearing some grumblings from officers—and, perhaps rightly so—about the assumed implications of the devices.  Just like any citizen, police officers want to be trusted by their superiors.  Who wants to be watched over their shoulder by the boss all day long?

The reality is that, although television, movies and news media occasionally report insane stories about rogue police officers or cops who make poor choices, for the most part, most police are decent, hard-working members of every society that rarely get a single complaint throughout their careers.  But there is more to it than that because those who carry badges and guns have the power to take away liberty: they can put people in handcuffs and hall them off to jail.  That’s a huge responsibility and because of that, citizens should demand that police officers are, well, policed.

Indeed, there does need to be oversight—and there is.  Citizen review boards, police administration, state certifying bodies, and even the FBI, work to ensure cops are doing the right thing, in the right way and at the right time.  The rights of all citizens ought to be protected and historically, technology has been used to help ensure that people’s rights are not abused.  But so it perhaps not just what’s too far, but also what’s necessary?

This push for constant surveillance reveals another market to me: embedded eyeballs and combat reporters.Nowadays, police car dash cams, innocuous surveillance cameras, as well as the cameras on everyone’s smart phones, capture all kinds of police actions, including lethal encounters.  One of the major technological changes in police work in the past decade has been the use of body cameras, like Taser’s Axon Flex body camera that many police agencies and individual officers use.  I even heard one cop speculate recently that he foresees the day when the body cameras will be recording the entire shift, whereas now police only activate body cameras when needed.

Tools like the Yardarm Firearm Telematics are not only marketed for police; certainly Yardarm hopes to entice the military and private security markets, too.  This brings up a couple of concerns, regarding videos and firearms tracking devices:

First, censorship is a two-edged sword.  Those who want the raw, uncut, unedited versions of what the warrior experiences are seeing things in the comforts of their homes without having walked miles in their bloodied boots.  A 30-second clip shown on a news broadcast or a two-minute video downloaded to YouTube just doesn’t show the reality of what’s experienced.  Again, a video does not cover the full totality of circumstances that the soldier is experiencing or has experienced.

Moreover, bringing the gruesome war coverage home can really horrify the homebody.  In short, there are things done and said in the combat zone that would frighten those who haven’t experienced such things.  There are repulsive and horrific images, deeds and words that citizens (including young kids and middle-aged kids) should not be exposed to.  Sadly, Hollywood has desensitized too many already.

There needs to be a shield to cover the citizenry of every nation from the hell of combat.  The warrior is the shield who ought to protect the eyes and the minds of those whom he or she serves.  Simply put, some aspects of combat coverage can devastate, destroy and breakdown the emotional and political integrity of any person or nation.

For cops, there’s not that much of a difference.  Most police have served in the military.  There’s emotional hardening needed for emotional survival.  There’s also dark humor that does not translate.  When it comes to video coverage, viewer beware…and be careful judging what you haven’t experienced. 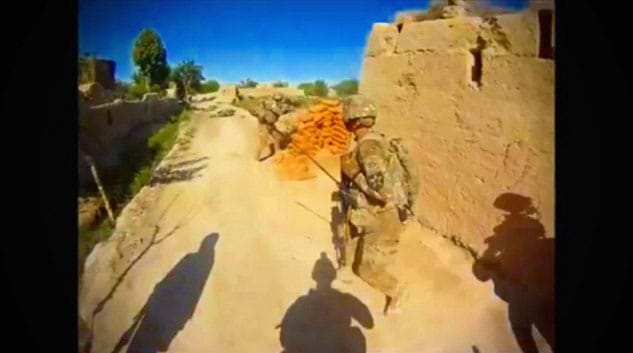 Helmet cam from a minesweeper in Afghanistan.

Second, as far as the mirco-computer inside a protector’s weapon goes, if it’s electric, it can be tracked, hacked and can just plain fail.  Just like we can’t rely too much on what we see in a short video—since that doesn’t tell the whole story—relying too much on electronic recordings that can give false-positive readings or be hacked by “anonymous” hackers or foreign adversaries. That can be equally or more devastating.

But for grunts on patrol, away from their MRAPs, hummers and tanks, would having a Yardarm device be helpful to higher elements and other teammates?  Perhaps.

While police have GPS and computers in their squad cars, military personnel also have computer systems and GPS-aided mapping software, like Blue Force Tracker, in their up-armored vehicles.  No doubt, the application of knowing where a weapon is pointing, to cover certain fields of fire, might prove beneficial in some military applications, no doubt.

Finally, the last and perhaps the most sensitive question of all: What happens when the government wants to have electronic devices in the personal firearms of every citizen?  Think of it: cops could know where every gun is that’s been used in a crime.  They could also know who has a gun and who doesn’t at every call they go to. 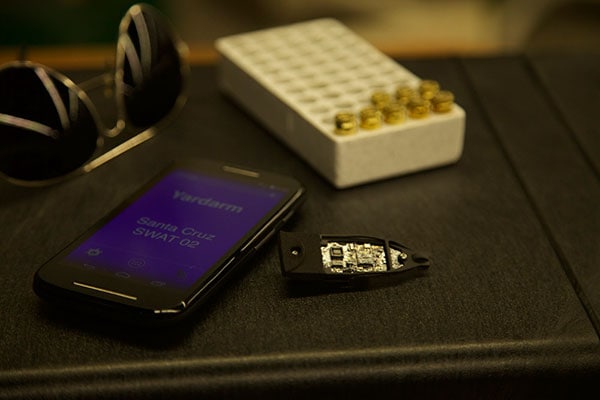 If someone losses a gun or has one stolen, a gun owner could simply track it down or have the police do it for them.  Police investigations would be incredible.  In a shootout between two parties, knowing who pulled the gun out of the holster first or which way it was pointed, or who shot first, could show enough evidence to solve many crimes.  Police could potentially track criminals a lot quicker than they currently do.

However, even the mere thought of some politician bringing that idea up—that every citizen or every gun should have a tracking device on it—makes my blood curl.

Do I want a tracking device or any electronic device on my personal guns?  No way!  I’m hopeful that no one would.  So, with that in mind, and considering all of the applications these techno-tools have for police, military, private security personnel, as well as private citizens, I’d have to say that I’m interested in this gun technology… more cautious than optimistic, though.