Issues at the heart of Ferguson 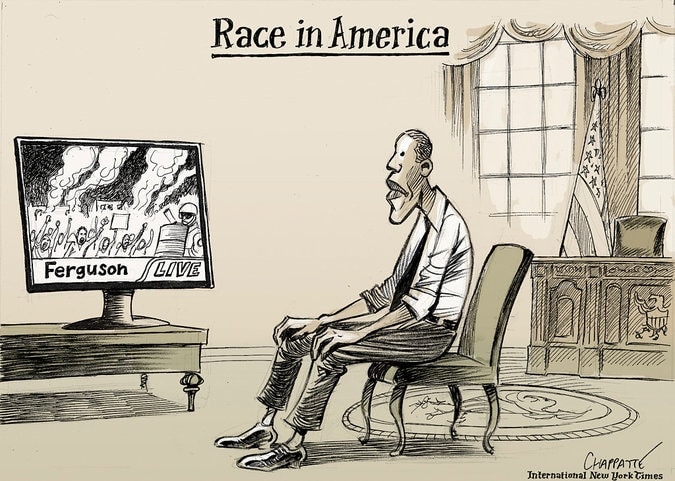 Following a St. Louis grand jury declining to indict policeman Darren Wilson for the shooting death of teen Michael Brown, the nation’s emotions ran the gamut and towns across the country prepared and received the worst.

While many commented on the mayhem that ensued, some attempted to define issues at the heart of the matter.

In his address to the country, President Barack Obama described issues in Ferguson as complicated and nuanced, which stem from the nation’s long running racial tensions, particularly between poor, black communities and law enforcement.

“We need to recognize that the situation in Ferguson speaks to broader challenges that we still face as a nation. The fact is, in too many parts of this country, a deep distrust exists between law enforcement and communities of color. Some of this is the result of the legacy of racial discrimination in this country. And this is tragic, because nobody needs good policing more than poor communities with higher crime rates. The good news is we know there are things we can do to help,” the president said, adding that he’s instructed Attorney General Eric Holder to help the community resolve its problems.

The attorney general reminded the public that the Justice Department will continue to investigate the matter.

“Michael Brown’s death was a tragedy. This incident has sparked a national conversation about the need to ensure confidence between law enforcement and the communities they protect and serve.  While constructive efforts are underway in Ferguson and communities nationwide, far more must be done to create enduring trust. The Department will continue to work with law enforcement, civil rights, faith and community leaders across the country to foster effective relationships between law enforcement and the communities they serve and to improve fairness in the criminal justice system overall.  In addition, the Department continues to investigate allegations of unconstitutional policing patterns or practices by the Ferguson Police Department,” Holder said.

The American Civil Liberties Union called for communities to work with their police and vice versa in order to avoid exacerbating future incidents, but also suggested that the problem occurred on a much larger scale.

“The grand jury’s decision does not negate the fact that Michael Brown’s tragic death is part of an alarming national trend of officers using excessive force against people of color, often during routine encounters. Yet in most cases, the officers and police departments are not held accountable. While many officers carry out their jobs with respect for the communities they serve, we must confront the profound disconnect and disrespect that many communities of color experience with their local law enforcement,” the civil rights group said.

The group added, “We must end the prevailing policing paradigm where police departments are more like occupying forces, imposing their will to control communities. This ‘us vs. them’ policing antagonizes communities by casting a blanket of suspicion over entire neighborhoods, often under the guise of preventing crime.”

The New York Times editorial board, which shares the president’s views that the shooting in Ferguson is a reflection of a national problem, described that a major part of the problem is institutional racism and police targeting easy prey, so to speak.

“News accounts have strongly suggested … that the police in St. Louis County’s many municipalities systematically target poor and minority citizens for street and traffic stops — partly to generate fines — which has the effect of both bankrupting and criminalizing whole communities,” the newspaper said.

“The case resonated across the country — in New York City, Chicago and Oakland — because the killing of young black men by police is a common feature of African-American life and a source of dread for black parents from coast to coast. This point was underscored last month in a grim report by ProPublica, showing that young black males in recent years were at a far greater risk — 21 times greater — of being shot dead by police than young white men. These statistics reflect the fact that many police officers see black men as expendable figures on the urban landscape, not quite human beings.”

Discrediting the theory that race is a prevailing problem resulting in police abusing black youths, National Rifle Association board member and musician Ted Nugent took to Facebook to describe the issue as distinctly belonging to black culture.

“Here’s the lessons from Ferguson America — Don’t let your kids grow up to be thugs who think they can steal, assault and attack cops as a way of life and badge of black (dis)honor. Don’t preach your racist bullshit ‘no justice no peace’ as blabbered by Obama’s racist Czar Al Not So Sharpton and their black klansmen. When a cop tells you to get out of the middle of the street, obey him and don’t attack him as brainwashed by the gangsta assholes you hang with and look up to. It’s that simple unless you have no brains, no soul, no sense of decency whatsoever. And don’t claim that “black lives matter” when you ignore the millions you abort and slaughter each and every day by other blacks. Those of us with a soul do indeed believe black lives matter, as all lives matter. So quit killing each other you fucking idiots. Drive safely.”

Conservative columnist and NRA guest speaker Mark Levin blamed the “left’s war on the civil society” as the issue at the heart of the matter.

“Ferguson burns and violence has been unleashed thanks to the reckless liberal media, the lawless administration (especially Eric Holder) exploiting the shooting to smear police departments across the nation, phony civil rights demagogues, race-baiting politicians, and radical hate groups,” he posted on Facebook.

While these are just a handful of opinions, during the prosecutor’s announcement Ferguson was mentioned in more than 3.5 million tweets, according to TwitterReverb, meaning lots of opinions were shared. So, tell us what you think.