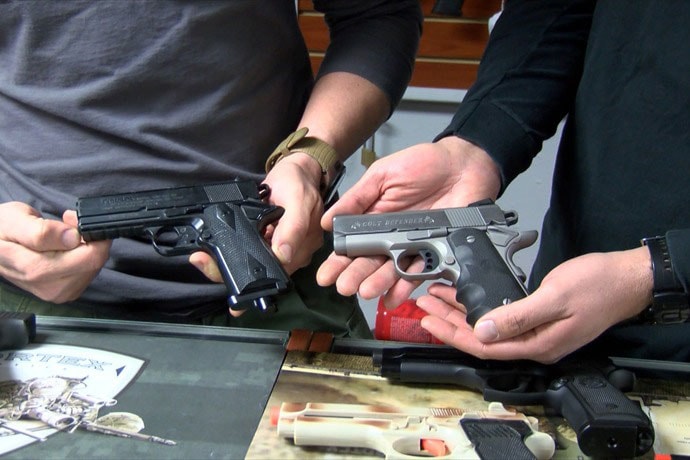 With a little black paint, an airsoft gun can look very close to the real thing. (Photo: ABC)

An unnamed Cleveland police officer has come under fire for his use of deadly force over the weekend against a 12-year-old boy carrying a gun later discovered to be an airsoft pistol. While the officer’s actions are being scrutinized by some, others have taken the opportunity to reiterate the importance of safety.

Officers were responding to a 911 call about a boy in a park waving a gun around and scaring people. The caller told the dispatcher she thought the gun might be fake, but apparently that information was not relayed to the officers.

As the officers approached Tamir Rice, they instructed him to put his hands in the air where they could be seen, but instead the boy moved his hands near the gun, which was tucked into his waistband. The officer, not knowing the gun was fake and fearing for his safety, shot Tamir, who died the following morning.

Chase Cejka, co-owner of the gun store American Brothers & Arms in Morningside, Iowa, demonstrated to a local ABC affiliate how easy it is to slightly modify an airsoft gun to make to look very much like the real thing. It’s something that should never be done, but often is by kids attempting to make toy guns look more realistic.

In fact, federal law requires airsoft guns to have an orange indicator tip to distinguish them from their more dangerous counterparts, but the orange tip on Tamir’s gun had been removed.

Additionally, almost 20 years ago, Cleveland passed a law that restricted the use of such toys in public, following a similar tragedy in which a 14-year-old boy, Jeffrey Bell, was shot and killed while holding a realistic-looking toy gun. The new law specifically prohibited the “brandishing” of replica firearms, including toys, while “in the presence of a law enforcement officer, firefighter, emergency medical technician or paramedic engaged in the performance of his or her duties.”

But “this really isn’t a firearms or an airsoft thing, it’s an education thing. The more you know about these the better off you’re gonna be and the better off you can watch and make sure nothing happens to your kids because nobody wants to see this happen,” Cejka said.

“Our officers, at times, are required to make critical decisions in a split second, and this was one of those times,” Williams said. “From this tragedy, we can gain knowledge. We can be proactive and diligent in teaching our children about guns and the dangers of playing with firearms, whether they are real or fake. Guns are not toys and the replica in this instance was indistinguishable from a real firearm. We must also make sure that our children know that the police are here to help, part of the community.”