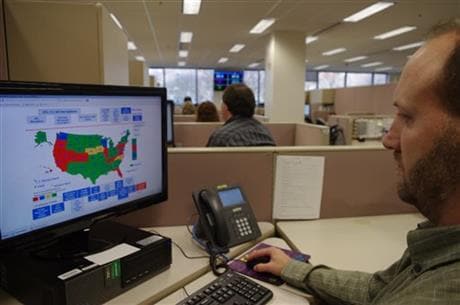 In this Nov. 18, 2014, photo, a researcher simulates a check done for the National Instant Criminal Background Check System or NICS, at the FBI’s criminal justice center in Bridgeport, W.Va. (Photo: The Associated Press)

With Black Friday looming, consumers are being inundated with special offers and gun enthusiasts are no exception, but more gun sales are going unchecked on the busiest shopping day of the year, according to the Federal Bureau of Investigation.

Last year, some 186,000 guns were sold by the more than 48,000 gun dealers in the U.S. — purchases not recorded by the National Instant Criminal Background Check, which the FBI blames on the states for not consistently providing updates on criminal and mental backgrounds, the Associated Press reported.

More than 21 million background checks were processed through the federal NICS system in 2013, 11.8 million of which came through state users, according to the FBI. The same year, there were some 88,203 background checks denied.

Those who oppose background checks say the system only stops law-abiding citizens from buying a gun.

“If the background check system is missing a few names, it really only means that there will be a fewer false positive cases where law-abiding citizens are stopped from buying a gun because they have a name that is similar to someone that the government really wanted to stop,” John Lott, president of the Crime Prevention Research Center told Guns.com.  “Mistakes that prevent some law-abiding citizens who may quickly need guns for protection from getting guns causes real harm to people’s safety and needs to be acknowledged.”

Federal background checks go through the 500-person FBI section but it’s unclear how many of those personnel actually process the mandatory three-day checks. Guns.com reached out to the FBI for clarification, but could not elicit a response by story publication. In 2013, the background check team ran about 58,000 checks on any given day and some 145,000 on Black Friday.

The group — who Guns.com also contacted for comment — and others gathered 246,674 signatures to put a similar initiative before Nevada voters in 2016 and plans on doing the same in Arizona and Maine.

Not all gun rights advocates outright oppose background checks. Alan Gottlieb, founder of the Second Amendment Foundation and the chairman of the Citizens Committee for the Right to Keep and Bear Arms, told Guns.com in April that fighting universal background checks is a losing battle and that gun rights groups need to lead the agenda on gun owner-friendly background check policy.

“I think we need to lead, something we haven’t done because now we’re seeing background check measures on ballots in various states that are extremely draconian that really do attack our rights and we have a problem because the public perception is basically ‘Hey, what’s wrong with a background check?’”