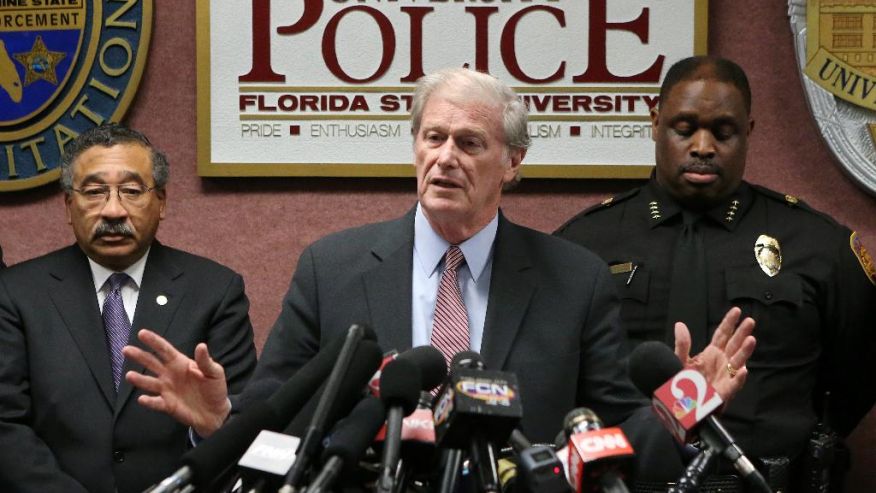 One of the three victims shot by a gunman last week at Florida State University in Tallahassee was a concealed carry permit supporter who couldn’t legally carry his gun on campus.

Nathan Scott, still hobbling around after catching a bullet to the leg last week, is credited by many as being a hero during the incident, after quickly moving to alert staff and students to the incident, and possibly save lives.

“After he was shot, he ran inside to warn others,” Scott’s friend Daniel Francis told the Tallahassee Democrat. “All of his friends and I were super-proud that he would be shot and further risk himself to go warn others.”

Scott, a 2010 FSU alumni, is currently working on campus as a library and museum assistant and his desk was outside the security barriers to the Strozier Library where a would-be mass killer opened fire on students last week. After the incident, Scott was injured and hospitalized, a second student was treated and released on scene, and a third, biomedical engineering student Ronny Ahmed, is paralyzed.

However, gun rights advocates on campus argue that Scott and others could have been better equipped to respond to the incident had it not been for the university’s strict gun ban, even for licensed concealed permit holders.

“The events of the last week in Tallahassee make plainly clear that it is unacceptable for responsible students who have gone to training, had extensive background checks, had their fingerprints taken, are of legal age, and are licensed by the state to be prevented from carrying their self-defense weapons on campus,” reads a release from Students for Concealed Carry at FSU, of which Scott is a member.

The group, a chapter of the larger national organization, contends that Florida State University President John Thrasher, who almost single-handedly killed a bill to advance legal concealed carry on campuses while in the state legislature, should use this incident as a call to reconsider his stance on the school’s prohibition.

Sadly, while Scott had the training and skills necessary to end the shooting, as did a US Army veteran who was on the scene, the group contends both were powerless to prevent it due to Florida’s laws.

“The way the laws are now, violent criminals know that they have a window where they can act with impunity before police arrive on scene,” Culbreath told Guns.com Wednesday. “This window varies, but as we have seen across the nation, in a student packed setting like a library the results can be unimaginably devastating. I am tired of seeing fellow students get shot at and having to flee for their lives when they know that if this shooting happened across the street off campus they would have the ability to have a fighting chance. Everyone deserves that chance, students are no exception.”

In recent years, students have fought for their concealed carry rights to be extended to their campuses.

Such efforts have been seen in Kentucky, Texas and Georgia. One 2013 challenge to such policies in Florida ended with a victory for gun rights supporters when an appeals court ruled that state universities do not have the power to ban law-abiding gun owners from keeping loaded firearms in their vehicles while on campus.

According to a study by the Crime Prevention Research Center, there have been no reported problems with permit holders in the nine states that mandate colleges allow permitted concealed handguns on campuses.

While law enforcement arrived quickly in last week’s incident and ended the threat, gun rights advocates argue than even a window as small as three or four minutes could be far too long in an active shooter scenario.

“Any response time beyond a gun in your hand is too long,” said attorney Eric Friday of Florida Carry. “You wouldn’t set your hair on fire and then wait for the fire department to put it out. You would grab a fire extinguisher.”

In recent days, administrators have been cool to the effort to advance gun rights for Florida State’s students.

“We haven’t heard anything from the administration. FSU is fairly conservative as far as colleges go faculty wise, the only feedback we’ve gotten from them is random members of faculty declining to sign our petitions but expressing encouragement and support,” advises Culbreath.