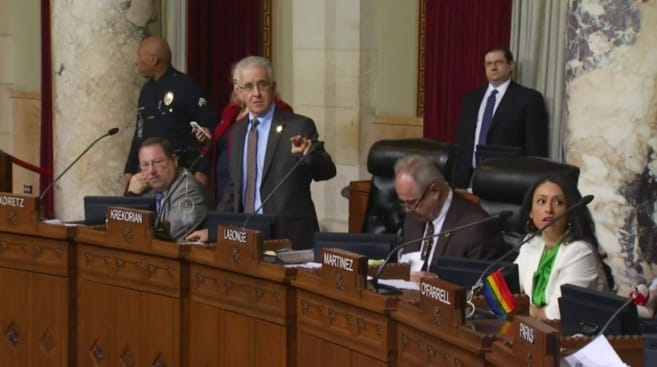 LA City Councilman Paul Krekorian, no fan of guns, leads a series of votes to increase regulation on them for 3.8 million Angelinos Tuesday. (Photo: KNBC)

By unanimous vote Tuesday, Los Angeles city lawmakers gave their approval to local ordinances to electronically track ammo sales and require guns in the city to be locked up when not in use.

Voting 11 to zero, the Council gave a proposed ordinance, which requires gun shops to email the Los Angeles Police Department information about each ammunition sale initial passage. In a similar vote, it approved a plan to draft an ordinance that would force law-abiding Angelino gun owners to secure their firearms when not in use or risk a fine and possible imprisonment.

“They both boil down to safety,” LA City Councilman Paul Krekorian, who is sponsoring both, told the local NBC affiliate. “These are simple and sensible steps that will keep people safe.”

The ammunition-tracking ordinance would require vendors in the city to email their ammo logs to the LAPD within five days of a sale. Currently, these logs force ammunition retailers in the city to record the name, address and right thumbprint of the purchaser, and amount and type of ammunition sold. These logs are maintained at the store in case the LAPD wants to audit them in the future. Now, if the new ordinance become law, the police would already have the database on file should they need it.

The measure’s text plainly voices fears of possible preemption by state law, which does not require such ammunition tracking saying, “While the proposed ordinance may be legally defensible, the possibility of preemption does exist, based on principles of duplication and implied occupation of the field by State law.”

The LAPD says that the reporting system is already in place and ready to move forward once the proposal is signed into law.

“The logs that each of the gun stores in the city are required to maintain — so this just causes them to email the logs to the city, to the department,” LAPD Capt. Charles Hearn told the local ABC affiliate.

Krekorian’s motion to draft an ordinance to require gun locks likewise passed the council and will be drawn up by city Attorney Mike Feuer, the inaugural co-chair of the new gun control group, Prosecutors Against Gun Violence, who intend to elevate prosecutorial response to gun issues nationwide.

The proposed Los Angeles gun-locking scheme, which goes further than current state gun safety requirements, is similar to one adopted in San Francisco. It comes on the heels of a controversial statewide ballot referendum passed earlier this month that reduced penalties for most cases of gun theft from a felony to a non-arrestable misdemeanor, which in the end could mean that gun owners who fail to properly lock up a gun in their home could face more severe penalties than that of a gun thief.

The 2007 San Francisco law mentioned by Krekorian has been involved in litigation in federal court for the past five years over challenges to its enforceability under the Second Amendment, and could go before the Supreme Court.

Detailing the evolutionary process of this latest attempt at anti-gun legislation, Winker explained, “When federal legislation failed after Newtown, gun control advocates focused their attention on state-level reform in places like Connecticut, New York, Colorado, Maryland, and, of course, California. Now we’re seeing city-level reform, especially on measures unlikely to be adopted at the state level.”

This move for establishing city-level controls is one that has gained ground in the Golden State in recent years, with towns like Sunnyvale and San Francisco passing increasingly restrictive ordinances far in excess of state laws.

“In California, Governor Brown is a moderate on gun control who has vetoed a number of gun control measures,” Winkler said. “Where advocates see opportunity at the local level, as in Los Angeles, they are seizing it. The problem is, of course, that the mobility of firearms and ammunition renders local gun control less effective than state measures, which is itself less effective than federal legislation.”

Gun rights organizations are decrying this latest move by the city of angels.

“Despite the Heller and McDonald decisions establishing that the Second Amendment protects a fundamental civil liberty that City of Los Angles must respect, these anti-gun politicians continue their blatant attack on the Second Amendment in open violation of state law that preempts local jurisdictions from regulating the lawful commerce in firearms,” Larry Keane National Shooting Sports Foundation senior vice president and general counsel, told Guns.com Tuesday.

Providing the ammunition-reporting ordinance is approved in its final vote, it would move on to likely signature by Mayor Eric Garcetti (D), who is a member of Michael Bloomberg’s Mayors Against Illegal Guns.