Man being beaten with power drill, wood and screws fires back at attackers, killing one (VIDEO) 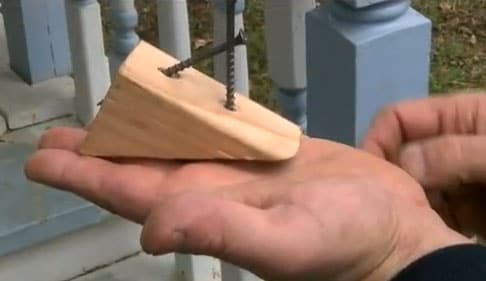 The suspects were apparently ready to inflict some pain with these homemade weapons. (Photo: WKBN)

An 18-year-old boy is dead after being shot by the victim of a brutal home invasion in Warren, Ohio, Saturday night.

According to Warren Police Lt. Jeff Cole, three suspects, at least one of whom the victim knew, were working together to get inside the home around 10:10 p.m. One suspect went to the door and when the resident, 29-year-old Benjamin Talanca, opened the door, he and the remaining suspects ambushed Benjamin.

The three men began beating Benjamin, but not just with their fists. According to the victim’s account, the suspects were using a power drill and blocks of wood with screws in them to hit him in the head.

“As soon as they get through the door, I mean, a split second. I didn’t have time to react,” Benjamin told WKBN. “All I am doing is getting hit in the head and I am bleeding all over the place. I can see my blood running down my face.”

But Benjamin was able to break free briefly, which allotted him the time to grab his gun.

“And when I got up I started firing. Period. And he was in my way,” Benjamin said.

Trent Hall was struck by the gunfire and taken to a local hospital where he died a short time later.

The victim’s father, Dominic Talanca, said the crime wasn’t random and Cole was inclined to agree.

“This wasn’t just pick a house and go into it. This was, ‘This is the house, this is the person.’ They came here to kill my son,” Dominic said. “He showed me his eyes. He has a lump on his eye, his eye is all swelled up and he showed me where he’s got staples in the back of his head.”

Benjamin, who did not want to show his face on camera, suffered from a laceration on his head and injuries to his face.

“One thing is for sure,” Cole added. “And I want to stress this. I don’t think this is a random act. I don’t want the community to be on guard for this. I believe this was an isolated incident.”

Authorities believe they have the identity of the second suspect and are working to identify the third.