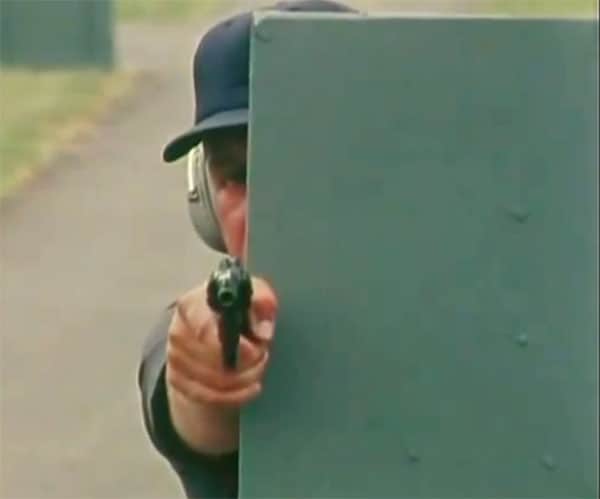 Whenever available, shoot from behind cover.

If you opt to carry or own a gun for self protection, you should already know that there may be times that you’ll have to make difficult decisions. Well, here are a few thoughts to keep in mind for tactical shooters that will help you make the right ones:

1. Be prepared to use deadly force.

This emotional, mental and psychological decision must be made long before the incident arrives. You may have to shoot a man, a woman, pregnant lady or a teenager. Think about it before the time arrives.  Be prepared to stop a co-worker, a neighbor, a teammate, friend or even a relative.  You may have to physically hurt or kill someone that you know or someone you’ve talked with or like or someone you think you know well.

2.  Have plan to kill everyone you meet.

This old military adage still holds true: if you have prepared for every possibility, you’ll be able to act or react quicker.  In gun fights, speed saves.

3.  Action is faster than reaction.

If someone’s pointing a gun at you, you must act fast. He can pull the trigger anytime he wants to and you’ll be DRT – dead right there. Never – ever – get involved in a so-called Mexican standoff where two people just stand there and point guns at each other.  Save that for Hollywood because in real life, if you do that, you could lose with disastrous results.

4. Have a positive ID on the threat/target, then shoot.

Be absolutely sure of your target before pulling the trigger.  If you’re too quick on the trigger, you might shoot the wrong person at the wrong time.

5. Shoot from behind cover, if available.

Know the difference between cover and concealment.  Get to hard cover – and stay there until the threat stops.  Of course, shoot from behind cover and move only if you are gaining a tactical advantage without sacrificing your own safety. 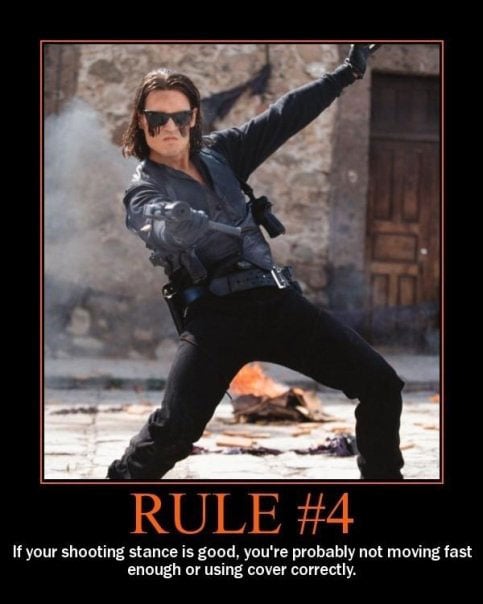 All in good fun… but there is nothing “fun” about self-defense.

6. Shoot on the move.  Shoot then move.  Move then shoot.

Practice all of these. Static shooting will get you killed.  Save that for target shooting and plinking.

7. Don’t turn your back on the threat.

If you need to retreat do so, but don’t turn your back, if possible.

8. Keep your eyes on the threat.

You’re eyes are key in battle.  Protect your eyes, and keep your head on a swivel.

Hesitation kills. Hesitation is your enemy–but so is shooting too fast.

10. Never give up your weapon.

It’s the largest area on the body. Save shooting the gun out of someone’s hand for the movies.  Don’t shoot the leg or the shoulder, shoot center mass.  The next best target is the head and then the pelvis, but first shoot center mass.

12. Know your ballistics and how it pertains to wound penetration.

If you’re justified to shoot, realize that the attacker might continue even after one or two shots, so keep shooting until the threat has stopped.  If you want some insight into this, plan a visit with an ER doctor in a big, violent city.

13. Shoot until the threat stops.

Forget the two-shots and stop drill. Try a six-shot rhythm drill on the target’s chest. 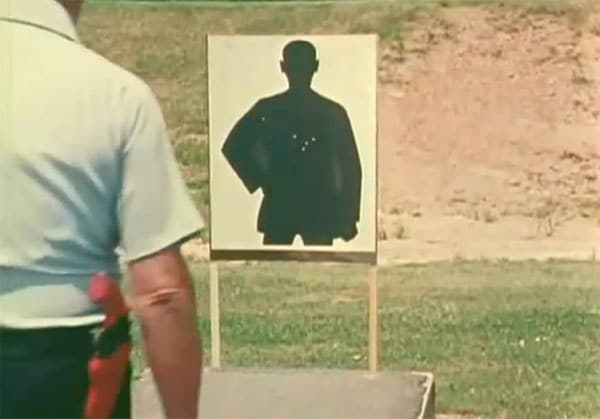 Shooting center mass (and training to shoot center mass) is the most advised way to stop a threat.

14. Have a self aid/buddy aid medical kit handy.

You’ll need it when you least expect it.

15. Don’t give up space you’ve already taken when clearing a room.

You’ll just have to re-clear that area again.

Confidence wins fights but bravado has injured and killed many people.

You can be scared (should be scared even), but you must act anyway.  Acting in the face of fear is called courage and its what is needed in gun fights.

Violence of action is your friend, as long as it is controlled.  Be tactically smart, but aggressive in movement and attitude.  Call it what you will, but in the end, more violence wins.

19. Know and be confident in your weapon disarming techniques.

Realize additionally that criminals, crazies and kooks can learn weapon disarming techniques just as well as you can. Also, be careful where you learn these techniques as some less advisable ones will get you killed.

Gen. Dwight D. Eisenhower once said, “Training in all its phases must be intensive.”  The harder you train, the more you’ll begin to conquer your own inner weaknesses and the more confidence you’ll gain.

Until next time continue to hone your skills and keep adding to your tactical toolbox.