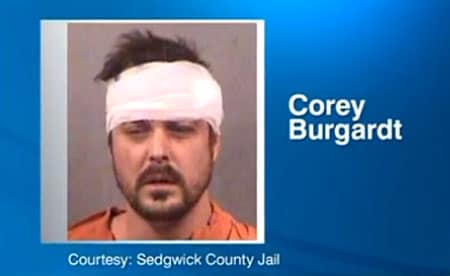 Corey Burgardt was charged with aggravated burglary, but may face other charges as well. (Photo: Sedgwick County Jail)

A burglar thanks his lucky stars after surviving a gunshot wound to the head during a break-in at a home in Valley Center, Kansas, Sunday morning.

The homeowner, who shot the burglar and wanted to be identified as Mr. Dudley, told KSN that he heard the sound of glass shattering about 8:30 a.m. as a house alarm went off. Dudley said he grabbed his gun and went to see what was causing the commotion.

He came face to face with a man crawling through the broken kitchen window of his house, but Dudley, protecting himself, his wife and three young children, opened fire on the suspect, later identified as 30-year-old Corey Landon Burgardt.

Burgardt fled the scene but was found nearby by officers responding just minutes after Dudley called 911. First responders transported Burgardt to a local hospital where he received treatment for what was described as serious injuries. Fortunately for Burgardt, the bullet only grazed his forehead and never penetrated his skull.

Shortly after his release, Burgardt was booked into the Sedgwick County Jail. He could face multiple charges, including aggravated burglary.

Dudley said he was “absolutely shocked” and “surprised” to find the man in his home and said he didn’t have time to think, he only reacted with his instincts as a husband and father.

Nearby residents told reporters that although the area is somewhat secluded and on a dead-end road, burglaries and break-ins have been increasing lately. Nonetheless, neighbors said Dudley, who is a pastor and well-liked, acted appropriately.

“Contact the NRA because that’s an armed citizen taking care of business,” said Dave Duncan, who lives a few houses down from Dudley.

“I would have probably treated them the same way,” said another neighbor, Robert Christians. “Makes me feel like I should go out further into the country where this doesn’t take place.”

No charges will be filed against Dudley, as he acted in self defense and is likely protected under the state’s Castle Doctrine Law.