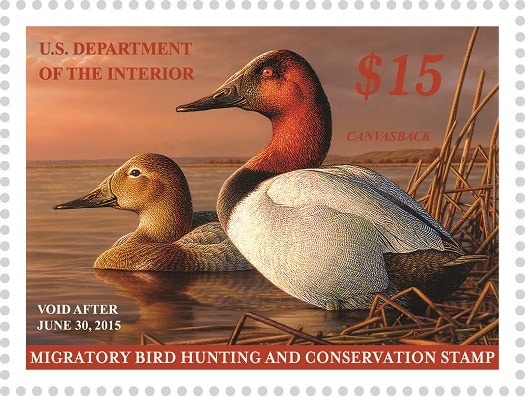 With widespread support, the Senate on Tuesday passed a bill to raise the price of Duck Stamps from $15 to $25 in an effort to increase funds for wetlands habitat conservation.

The measure, the Federal Duck Stamp Act of 2014, had started in the House, sponsored by Rep. John Fleming, R-LA, and was backed by the entire delegation to that body from the Sportsman’s Paradise. Easy passage in the House in November led to Tuesday’s Senate vote, spearheaded by Sen. David Vitter, another Louisiana Republican and ranking minority member of the upper chamber’s Environment and Public Works Committee.

“This is huge news for conservation and duck hunters. As we move forward to conserve millions of acres of waterfowl habitat, it’s important to remember the mutually beneficial relationship between our nation’s sportsmen and ducks,” said Vitter in a statement. “This legislation boosts conservation efforts, which in turn directly impacts the success of duck hunters in near and future hunting seasons.”

The bill, H.R. 5069, is the first update in the price of the federal duck stamp since 1991. That legacy $15 figure, adjusted today’s value, is $26, which makes the increase largely just a matter of keeping up with inflation.

According to information from the U.S. Fish and Wildlife Service, who administers the program, Federal Migratory Bird Hunting and Conservation Stamps were first established in 1934 as hunting license for harvesting migratory waterfowl. Still a requirement for taking ducks, geese and other regulated wetland birds, 98 cents on every dollar generated by their sale goes to expand habitat that is managed by the National Wildlife Refuge System.

In 2011, some 1.5 million duck stamp purchasers funneled more than $20 million into habitat preservation. Since its inception, duck stamp proceeds have helped preserve 6 million acres of habitat for future generations.

Conservation groups are pleased with the move.

“The additional duck stamp funding provided by waterfowl hunters and other conservationists will not only conserve critical waterfowl habitat, but will also help ensure the future of our waterfowling traditions,” said Ducks Unlimited CEO Dale Hall.

The bill will now proceed to President Obama’s desk for veto or signature. Current stamps expire on June 30, 2015 and the new prices, should the president sign the act into law, will likely appear on stamps for the 2015-2016 season.