Company rebrands the AK, calls it 'Weapon of Peace' (VIDEO)

Armed with a new logo and a new direction, Rostec, the largest current shareholder of the Kalashnikov Concern, abbreviated C.K., is re-launching the Kalashnikov brand and the AK-pattern rifle as “the weapon of peace.”

“The Kalashnikov is a Russian symbol that is known across the world,” said Alexei Krivoruchko, Kalashnikov’s chief executive officer at a launch party in Moscow. “The rebranding is a symbol of changes in the way our business works and our product lines that have been long in the making. The new brand will reflect our main principles: reliability, responsibility and technological efficiency.”

The move will finalize the union of several Russian brands under one roof including Kalashnikov, Izhmash and Baikal. These companies together make up the Kalashnikov Concern and represent not just military and police arms, but sporting guns for hunting and competition, learners and pellet guns and of course, firearms for personal defense.

Russia recently eased their gun laws to permit licensed firearm owners to carry guns for self-defense. The new laws let people carry handguns, shotguns and less-than-lethal weapons for personal protection. Prior to the new laws gun owners could only travel with firearms if they were traveling to and from hunts and other sporting engagements.

The new policies are designed to spur sales around the world. The Kalashnikov Concern took a big hit this year following U.S. trade sanctions against the then-predominately state-held company due to Russia’s presence and involvement in the Crimean Crisis.

These sanctions completely bar the importation of Kalashnikov Concern products to the States, deeply cutting at the firm’s bottom line. The company planned to import several hundred thousand firearms to the U.S. and Canada in the next couple of years. 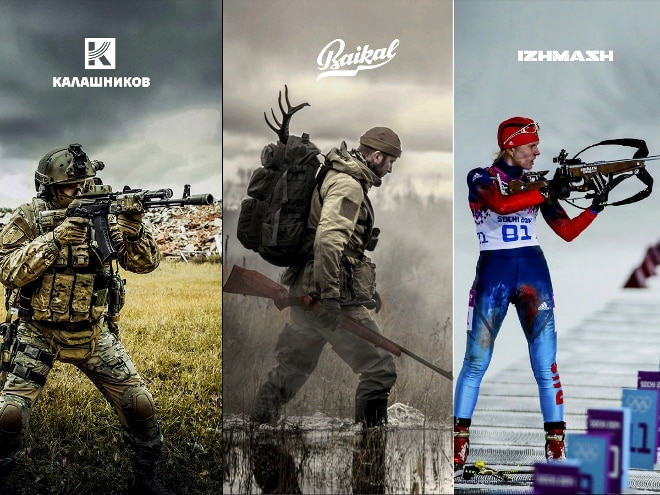 The three faces of the Kalashnikov Concern, defense, sports and competition. (Photo: C.K.)

The new marketing campaign is aiming to re-frame the AK not just as a fighting rifle, but a symbol of social and cultural revolution.

“The gun was made for the defense of a country that was living through the cold war and had to be prepared for a major intervention,” explains the video. “The simple and reliable AK was also in demand well beyond the borders of the Soviet Union.

“It precipitated not just a technological but a social revolution. Freedom movements in Africa, Asia and Latin America could at last fight back against professional colonial armies. The AK-47 gave them the chance to demand rights and achieve justice. This is a weapon which helped people defend their families and futures, and demand the right to a peaceful future.”

The re-branding went on to take a page from Colt bible, famously selling their guns under the slogan “Abe Lincoln may have freed all men, but Sam Colt made them equal,” stating that “The idea is that weapons should help keep the peace, uphold justice, dignity and the right to life.

“Weapons make a man courageous, alert and create high sense of responsibility. Weapons protect the weak from the strong.

“With a weapon in hand, people can ensure a peaceful future for their families, the nation and the country.”

While their future in the U.S. is still unknown, their international plans remain unshaken. The Kalashnikov brand will be expanded to include sportswear, a fashion line and knives and cutlery, all built to live up to the world-renown Kalashnikov reputation, re-focusing on sales to Asia and South America in addition to Russia and parts of Europe.

Rostec’s Sergei Chemezov has high hopes for the new brand and direction, expecting the Kalashnikov name to one day be as well-known around the world as Apple is today.