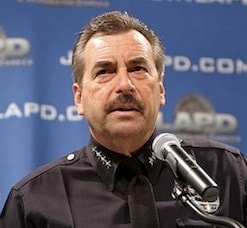 In a recently released report, the police chief wrote that the evidence in the case does not support the officers’ claims that they feared for their lives, the Los Angeles Times reported. Three of the 15 shots that hit the suspect during the Dec. 13, 2013 pursuit came from behind and were likely ones that killed him.

City officials agreed to pay $5 million in April to settle the lawsuit filed by the family of the suspect, 51-year-old National Guard veteran Brian Newt Beaird.

The Times reported that the police chief is now deciding how to punish the officers — who have been on leave since the incident — if they’re to be disciplined at all.

Baird led police on a chase for nearly an hour before smashing his Corvette into another vehicle at an intersection.