Officer stops active shooter with 1 bullet, at 300 feet, while holding reigns of 2 horses in the dark (VIDEO)

The police officer who stopped an active shooter in Austin on Friday did so in the morning darkness while holding the reigns of two horses, but the officer said it was more than just luck or even skill that was responsible for the perfectly placed shot.

Larry Steve McQuilliams opened fire downtown around 2:30 a.m., leaving more than 100 bullet holes in the Austin Police Department and numerous other shots in the Federal Courthouse, Mexican Consulate building and a nearby bank, local media reported.

Evidence found by investigators indicated that McQuilliams had planned a larger attack at 34 locations, including two churches, four federal buildings, banks and other government facilities. However, his shooting spree was cut short when Sgt. Adam Johnson heard the shots ring out while loading up the horses from the department’s mounted patrol unit nearby.

According to Austin Police Chief Art Acevedo, Johnson fired a single shot from his Smith & Wesson M&P .40-caliber handgun from a distance of about 312 feet away, while holding onto the reigns of two horses. The shot struck McQuilliams in the chest, killing him. No one else was injured, even though McQuilliams fired over 200 rounds. 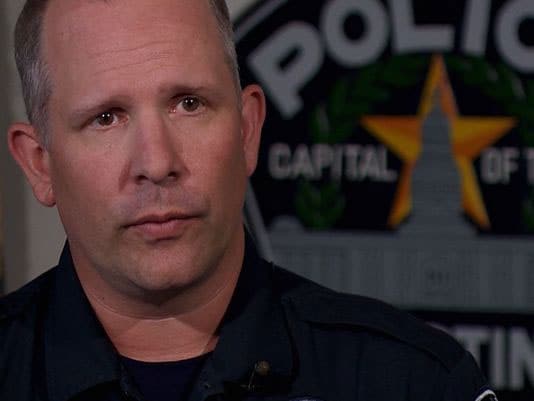 A local ABC affiliate talked with Sgt. Adam Johnson in October about the department’s mounted police unit, which he joined in July. (Photo: KVUE)

Johnson, who is a 15-year veteran of the force, is being called a hero and the shot nothing less than impressive, but Acevedo said Johnson, who has not spoken publicly, is a little embarrassed by all the attention he’s receiving. Acevedo said Johnson isn’t taking all the credit for stopping the gunman either. He said “divine intervention” played a part and most of the credit should instead go to the mounted patrol units who were advancing on McQuilliams when Johnson took the shot.

Nonetheless, Acevedo was happy with the way the situation was handled and called it “a good day.”

“For a guy to keep his composure, holding two horses with one hand and taking a one hand shot with the other hand just says a lot about the training and professionalism of our police department,” Acevedo said.

Following the incident, authorities discovered the words “Let Me Die” written in marker across McQuilliams’ chest, as well as clothes laid out across the bed at his home, which was presumably the attire he had chosen to be buried in.

McQuilliams was believed to have extremist views, had a criminal background and was also linked to “hardcore” white supremacy.

“Hate was in his heart,” said Acevedo, who pointed out that “Terrorists come in all sorts of colors, ethnicities, and religions.”