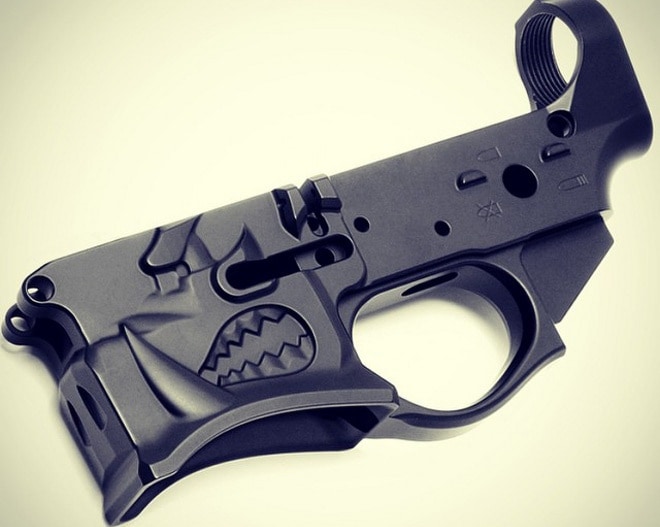 The Sharps Bros. company is now shipping its unique “Warthog” lower receiver for AR-15-pattern rifles. A complete tear-down of the standard AR aesthetic, the Warthog receiver draws from A-10 Warthog fighter jet nose art for inspiration.

The whole magwell has been machined with a stylized relief of an growling, sharp-toothed boar. The front of the magwell shows off the boar’s flared nostrils to complete the look.

Everything behind the boar is pretty familiar but the Sharps Bros. have definitely kept an eye on style by going with minimalist engravings for the maker’s mark, serial number and multi-cal mark.

The Warthog has clear pictograms for the selector lever on both sides for use with left-handed and ambidextrous safety levers. The pictograms are marked safe, semi-auto and full-auto although as configured, the Warthog is a semi-automatic lower receiver.

Like other World War II aircraft-inspired receivers, the lower receiver is machined from a single billet of 7075-T6 aluminum alloy with a MIL-SPEC hard-anodized finish.

While it’s perfectly fine to pair this lower with a standard 5.56 NATO upper receiver it’s begging to be used with a real thumper of an upper, like .450 Bushmaster, .458 SOCOM or .50 Beowulf.

You don’t have to spend a lot to get a fine .458 SOCOM upper, either, not since Radical Firearms started offering a similar fully-assembled upper for just $469. Not bad for a complete upper, including a .458 bolt carrier group and custom muzzle brake.

Or you can build one yourself using Aero Precision’s new .458 SOCOM upper designed with an oversized ejection port and cover for use with large-caliber AR cartridges. It’s currently on sale for only $79 which is a great deal.

After all, the Sharps Bros. came up with the idea for this to celebrate a hog hunt. The Warthog is destined for big-bore blasters.

If you like the look and want one of your own a batch is headed to Spike’s Tactical as well as BMC Tactical. We expect it to be priced in-line with the Hellbreaker at $299.

Yes, it’s a little more expensive than your run-of-the-mill lower, up there with some very premium receivers, but it pays to support the arts, doesn’t it? To keep up on all things Sharps Bros. check out the company’s Facebook page.