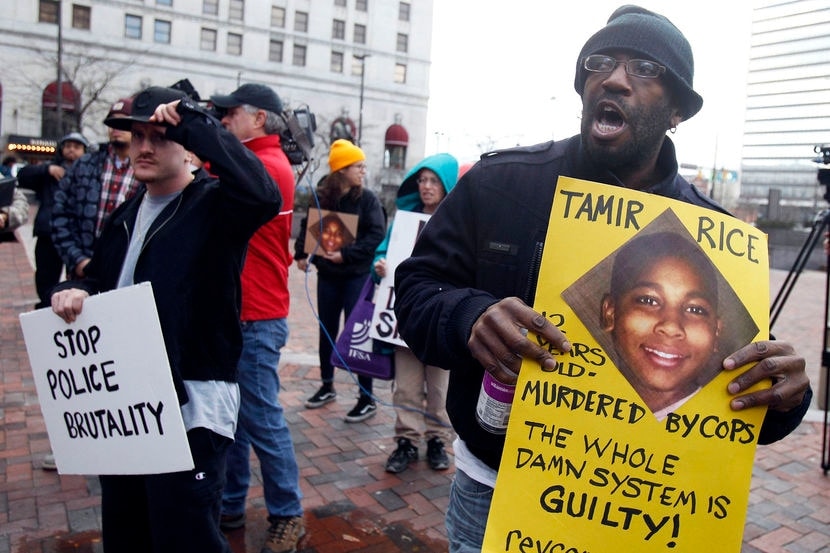 The officer-involved shooting death of a 12-year-old boy holding a toy gun in Cleveland last month is one of several recent examples that have further damaged the police department’s already bad reputation.

Following the Nov. 22 shooting of Tamir Rice, the officers involved were placed on administrative leave, per police protocol, and the case turned over to the Use of Deadly Force Investigation Team.

Cleveland police were allegedly errant in the hiring of one of the officers, who’s application was turned down by the New York City Police Department and who was asked to leave the Independence Police Department after serving for less than a year because he was emotionally unstable and unfit for duty, MSNBC reported.

The shooting came during the tail end of an investigation by the U.S. Department of Justice, who on Thursday released its findings of a pattern of excessive force use within the Cleveland Police Department.

DOJ investigators began looking into the Cleveland Division of Police practices in March 2013 after finding out about a number of high profile incidents and requests from the community to investigate the division, it said.

In March 2011, Cleveland newspaper The Plain Dealer began its investigation into the police department’s use of force. The publication reported that between October 2005 and March 2011, officers used Tasers a total of 969 times and only five of which were deemed appropriate by department investigators.

According to the DOJ’s 58-page report, the pattern or practices included “the unnecessary and excessive use of deadly force, including shootings and head strikes with impact weapons; the unnecessary, excessive or retaliatory use of less lethal force including Tasers, chemical spray and fists; excessive force against persons who are mentally ill or in crisis, including in cases where the officers were called exclusively for a welfare check; and the employment of poor and dangerous tactics that place officers in situations where avoidable force becomes inevitable.

Investigators concluded that Cleveland officers are not adequately trained or supervised and the department insufficiently investigates itself internally after claims of officer misconduct surface.

The DOJ further concluded that these violations erode the trust between police and the communities they serve, making it more difficult to do police work and cause increased distrust among residents.

“For example, we observed a large sign hanging in the vehicle bay of a district station identifying it as a ‘forward operating base,’ a military term for a small, secured outpost used to support tactical operations in a war zone. This characterization reinforces the view held by some—both inside and outside the Division—that CDP is an occupying force instead of a true partner and resource in the community it serves,” the report said.

The Cleveland Police Department is not commenting on the DOJ’s investigation, nor the investigation into the shooting of Rice, which is still ongoing, Sgt. Ali Pillow told Guns.com.

On Thursday, Cleveland Mayor Frank Jackson released a statement saying he called for a DOJ review in December 2012 “to obtain an objective, transparent, outside evaluation of the Division of Police’s policies and operations related to the use of force.”

One day after Rice’s death, which occurred the morning following his shooting, the mayor and chief of police, Calvin Williams, offered their condolences. Williams said there was knowledge to gain from the tragedy.

“We can be proactive and diligent in teaching our children about guns and the dangers of playing with firearms, whether they are real or fake,” Williams said. “Guns are not toys and the replica in this instance was indistinguishable from that of a real firearm.”

Two Cleveland police officers forced a 127-pound child to the ground, driving a stun gun twice into his back once he was down after he was suspected of stealing from a store in 2013, the Cleveland Plain Dealer reported. During the same year, police used a stun gun on a handcuffed suspect who fell after trying to escape.

In late-November 2012, more than 100 Cleveland officers were involved in a high-speed chase that resulted in the shooting death of two unarmed civilians. That there were so many officers involved was a violation of department policies, according to the DOJ report. The chase was set off after the vehicle in question backfired while driving past the Justice Center.

A police helicopter video was released in January 2011 which showed officers using excessive force against an unarmed man who had led them on a chase. The suspect surrendered and was in custody and handcuffed when police proceeded kick him in the head. None of the officers involved reported having used any force during apprehension of the suspect and were not appropriately disciplined for failing to do so, according to the DOJ report.