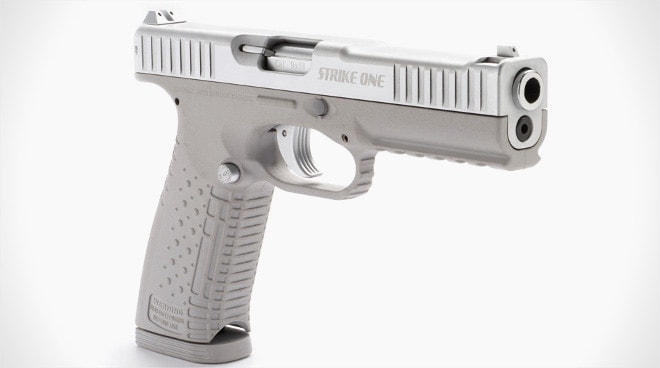 It can’t be said that the Strike One doesn’t stand out of the crowd. (Photo: Arsenal)

Arsenal Firearms, a company who’s best known for the anything-but-humble double-barreled 1911 pistols, also makes much more practical handguns. The Strike One, a polymer-framed striker-fired handgun, is just beginning to appear on the U.S. market.

A joint Russian and Italian firm, Arsenal developed the Strike One, or Strizh as it’s known in Russia, for police and military use and of course, self-defense and competition. Their first model is a full-size wondernine with a 17+1 capacity and a 5-inch barrel.

Shooters have been eagerly anticipating the Strike One since it was first unveiled in 2012 with good reason. On paper the handgun looks a lot like any other full-size polymer-framed, striker-fired service pistols but a closer look reveals some significant deviations from the routine.

This in combination with a striker means that the barrel and bore can be lowered right down to the fire control group, and the lower the bore axis and the faster the cyclic rate, the less recoil the user perceives. And since the barrel doesn’t tilt it doesn’t contribute to muzzle flip. 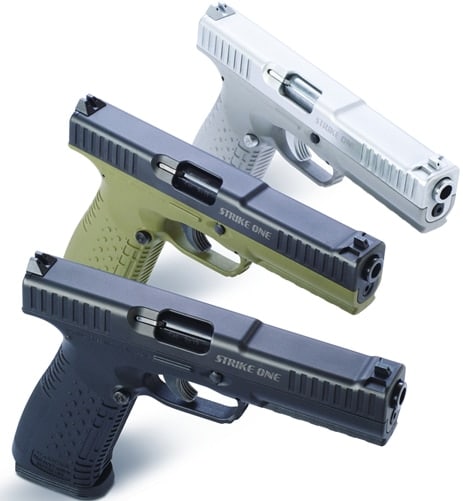 The result is a gun that by all early accounts is a soft shooter. It doesn’t hurt that the pistol has a huge beavertail and wide, full-handed grip, two things that reduce felt recoil for any gun.

Of course the final product isn’t recoil-free, it’s not possible to completely mitigate the kick of a recoil-operated pistol, but the Strike One’s design is a little flatter, a little faster, and for users who need that for comfort or for competition it delivers on that front.

The Strike One has a sub-frame with integral rails that run the full length of the pistol, unlike many polymer-framed pistols which use inserts or short railed locking block. This lends to the accuracy of the design and eliminates any frame flex while shooting.

One way that the Strike One doesn’t differ from the norm is in the trigger department. It uses a pre-set striker that’s only partially-cocked after cycling the slide, unlike many new guns on the service pistol scene which have single-action strikers.

This means that the trigger is a little longer than the new wave of striker-fired pistols, and the trigger needs to be let out to fully to its forward position to reset.

In the past Arsenal has said they intend to deliver a competition variant of the Strike One to their catalog, so there’s hope for people who like the look and operation of the Strike One but want the crisp, two-stage-like triggers of newer striker-fired service pistols like the Walther PPQ, FN FNS, SIG P320 and Heckler & Koch VP9.

With retail pricing starting at $849 and a lot of vendors sticking to MSRP, the Strike One is set to be a boutique gun with a select audience even though the price reflects, in a lot of ways, the build quality and attention to detail that goes into these pistols.

When it comes to guns there’s always someone out there who wants something a little rare, a little unusual and pretty special and that’s where the Strike One shines right now. With different models, better availability, lower prices and a little aftermarket support that could all change.

More options are always a good thing and you can be sure that if these guns are hard to find, it’s because they’re getting snatched up fast. Check out these reviews for some hands-on impressions.