Editorial: Who are the Oath Keepers? 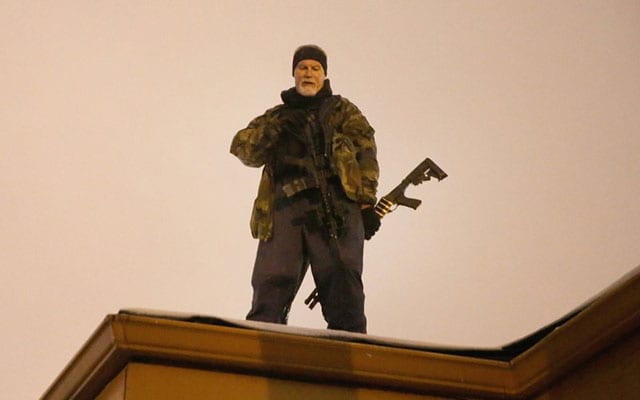 According to their website The Oath Keepers are “a non-partisan association of current and formerly serving military, police, and first responders who pledge to fulfill the oath all military and police take to ‘defend the Constitution against all enemies, foreign and domestic.'”

You may have caught images of them on the news, standing alone on rooftops, armed with shotguns or rifles, high above the senseless mob scenes below.  Who or what are the Oath Keepers, and exactly what oath do they purport to be keeping? Those are some of the questions that seem to have been floating around lately, especially in light of the rioting going on in places like Ferguson, Missouri.

According to some reports, as well as the Oath Keepers’ website, they are, “A non-partisan association of current and formerly serving military, police, and first responders who pledge to fulfill the oath all military and police take to ‘defend the Constitution against all enemies, foreign and domestic.’ That oath, mandated by Article VI of the Constitution itself, is to the Constitution, not to the politicians, and the Oath Keepers declare that they will not obey unconstitutional orders, such as orders to disarm the American people, to conduct warrantless searches, or to detain Americans as ‘enemy combatants’ in violation of their ancient right to jury trial.”

Their website goes on to say that, “Oath Keepers reach out to both current serving and veterans to remind them of their oaths, to teach them more about the Constitution they swore to defend, and to inspire them to defend it.”

Indeed, article VI of the Constitution clearly says, in part, that everyone, including those aforementioned politicians, shall be bound by the laws of the land and by the Constitution. It also says that they (the politicians again) shall be bound by oath or affirmation to the Constitution. In fact, just re-reading article VI over a couple of times, I cringe at just how far afield we have drifted in this country over the course of the last few years in allowing some in Washington, DC to not follow this document. 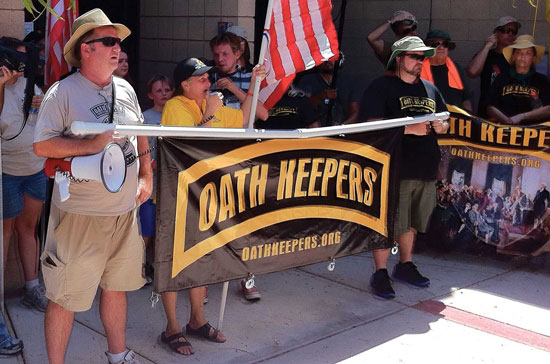 The Oath Keepers were formed in the aftermath of Hurricane Katrina by Stewart Rhodes in response to looting and weapon confiscation.

The organization seems to have started right around the time of Hurricane Katrina back in August of 2005. We all remember that one.

Of the litany of problems the residents of New Orleans found themselves facing in the aftermath of the storm, not the least of these was that a number of people, who had been given ample warning days before of an approaching hurricane, stayed in town for whatever reason.  (The city dodged approaching storms twice in 2004, so I guess they must have thought Katrina would be just another near miss.)

They were very wrong.  And after it hit, there was some significant looting of private property, for both emergency survival and criminal purposes, and a whole lot of wailing about how the government had somehow let them down. The ravenous media at the time went into overdrive lambasting President George W. Bush for everything occurring in the storm’s aftermath.  And then came the police and the National Guard, who apparently began rounding up weapons from private citizens.

And apparently that was enough for Yale constitutional scholar Stewart Rhodes, who soon thereafter formed the embryonic Oath Keepers, an organization made up primarily of military veterans and law enforcement personnel who strictly adhere to the letters of the U.S. Constitution–folks who put themselves in harm’s way to ensure that the laws of the land, and the Constitutional restraints of the United States, were being upheld.

But, while all of that sounds highly patriotic and wholesome, there are a growing number of citizens who do not support the group’s vision and think that organizations such as this should be watched very carefully by authorities.

After a few nights of vigilance (and after getting the all-clear from the local police to watch for trouble spots in Ferguson, Missouri) complaints from some citizens caused the St. Louis County Police to order the group to curtail their activities and to leave the area. According to Stewart Rhodes, however, after they were ordered off of the rooftops, they joined the protesters down on the streets, not to violate the law, but to watch for those who did.

In much the same way, the Oath Keepers have found themselves the target of groups such as the Southern Poverty law Center (SPLC). Following an incident where there was an arrest in Arizona, one where the Oath Keepers came to the defense of the lady being arrested, the SPLC was quoted as saying, “What does seem clear is that the Oath Keepers, a group that traffics in conspiracy theories about government plots, were determined to use the controversy for their own ends.”

To that, all I can say is that, no matter the suspicions of liberal organizations or the media, if the unrest we see in Ferguson, Missouri continues to spread to other parts of the country in the days and weeks ahead, we will undoubtedly be seeing more armed “Oath Keepers” in the background.