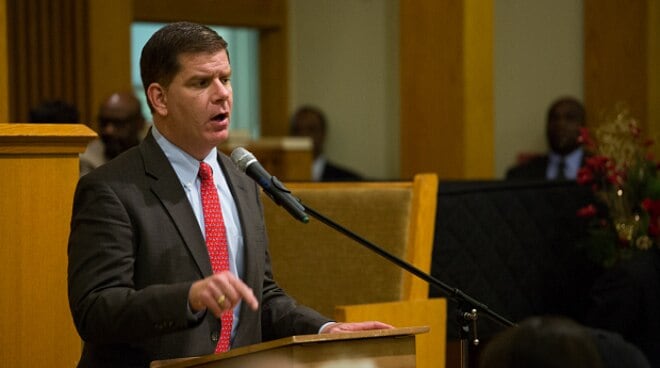 Walsh made his position clear following the President’s proposal calling for a three-year, $263 million overhaul of law enforcement community programs that would earmark $75 million for 50,000 body cams for law enforcement agencies across the country.

Cameras “aren’t going to help with the fundamental problems between community and police” and that recording the day-to-day actions of police officers doesn’t deal with the core issue driving racial tension between law enforcement and residents,” Walsh told the Boston Globe.

“We have to have a lot more discussion around race and racial issues,” Walsh said. “It’s not one that people want to have and people would rather forget about, but we’re not going to forget about it in Boston. I made a commitment to have that conversation, and we’re going to have it.”

According to Boston Police spokesman Lt. Michael McCarthy their hesitance is in part because of the lack of a clear plan for implementing body cams.

“Our stance has been that there’s a lot that needs to be looked at,” said McCarthy. “We’re not dismissing the idea, but we recognize it’s not simply, ‘Yes, let’s get them; no, let’s not. There’s data storage issues, there’s privacy issues, there’s cost — who wears them, who doesn’t. It needs to be studied. We do so much more than just pull cars over.”

Mayor Walsh hasn’t come out explicitly against body cams, just that the money could be better used for more conventional police programs and improved community services.

Walsh believes Boston can be first in improving community relations on its own, saying “I think Boston, in a lot of ways, is a leader in community policing.”

“We couldn’t get into an intimate conversation because there was an awful lot of people [at the Presidential meeting where the program was proposed], but it was interesting to be sitting at the table. I know the president is taking this issue very, very seriously. We’re looking at making some fundamental changes in this country.”