SilencerCo is one of the industry’s most trusted names in suppressors and suppression technology. They make some of the most forward-thinking products and accessories in the suppressor world and now they’re focusing on another key aspect of noise-reduction: the ammo itself.

The company launching the new Harvester brand of ammunition developed specifically for hunters and marksmen who want a round that’s optimized for precision and terminal performance while staying within the subsonic envelope.

Their first product is Harvester Subsonic 300 BLK ammo. 300 AAC Blackout ammo can be hard to find, especially niche subsonic loads, so this is welcome news to all the 300 BLK fans out there.

But the real reason SilencerCo decided to start manufacturing ammunition is that they weren’t satisfied with existing products on the market.

“At SilencerCo, we are customers first — hunters and shooters,” said SilencerCo CEO Joshua Waldron in a release. “We were underwhelmed by the quality of subsonic ammo on the market. Customers shouldn’t have to accept a tradeoff between accuracy and sound reduction, so we designed the Harvester ammo line to provide sub-MOA accuracy in the quietest subsonic 300 BLK ammunition on the market.”

Load development for subsonic cartridges can be tricky, and that’s especially true for 300 BLK. Barrel length plays a big part in developing a load and with 300 BLK, there is no real standard barrel length. Bad load development doesn’t just mean wandering accuracy, with 300 AAC Blackout, it can mean baffle strikes and catastrophic failures when running suppressed. 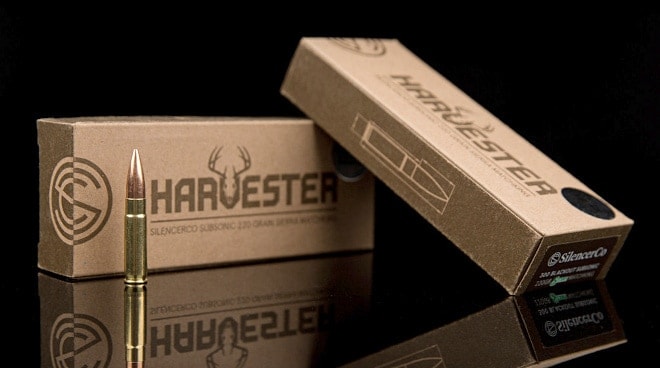 Developing a cartridge that’s just as accurate and reliable in a 7.5-inch pistol as it is with a 16-inch carbine is no small task, so it means a lot to shooter that SilencerCo is putting their name behind — and baffles in front of — the Harvester brand of ammo.

It will be interesting to see what calibers SilencerCo plans to work up in the future. We expect to see loads that work with their other products, including their Osprey and Octane suppressors for 9mm, .40 S&W and .45 ACP handguns. A line of .22 Long Rifle ammunition would be welcome, but surprising, as rimfire ammunition requires completely different machinery to manufacture.

SilencerCo is advertising the Harvester 300 BLK ammo as having .79-MOA accuracy, just over three-quarters of an inch of deviation every 100 yards, compared to 1.26-MOA with Hornady ammo, 2.69-MOA with Remington ammo and 3.59-MOA with Gemtech loads.

The rounds are tipped with 220-grain Sierra MatchKing bullets and make just over 1,000 feet per second generating over 500 foot-pounds of force at the muzzle, comparable to over-pressure .45 ACP loads. This isn’t a load for big game hunting by any means but it’s enough for small to medium deer and wild pigs and javelinas and your bigger varmints.

And while SilencerCo could price this stuff at just about any point and still be able to move it, they’re listing it at a very reasonable $29 per 20-round box or $269 for a 200-round case. The ammo will be offered through dealers as well so it’s entirely possible that street prices could be less.

The fact that SilencerCo is making their own ammunition means that 300 BLK shooters have a “no-brainer” option when it comes to selecting subsonic ammo. To order yours now head over to the SilencerCo website. If you can’t get enough SilencerCo news head over to their Facebook page for daily updates.