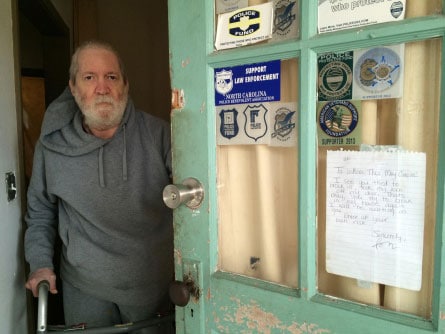 Joseph Sapienza taped a note to the front door of the 113-year-old home his grandfather built, warning those with ill intentions not to return. (Photo: Gaston Gazette)

When two men attempted to break into a Gastonia, North Carolina, home Thursday night, they may have thought it would be an easy target since the homeowner is a disabled man who uses a walker, but they quickly discovered they were wrong when the 68-year-old pulled out his .45.

Joseph Sapienza told the Gaston Gazette that he was watching TV in his bedroom a little before 8 p.m. when he heard somebody at the front door trying to pry off the lock.

Sapienza, who served four years in Vietnam while in the Marine Corps, didn’t hesitate, but grabbed his .45-caliber handgun, slipped it into the holster on his walker, and headed for the door. He yelled out that he was armed before opening the door just soon enough to see the two ski mask-wearing suspects run away.

“It was like a ‘Keystone Cops’ scene,” Sapienza said. “When they saw the .45, one ran one way up the street, and the other went the other way.”

Sapienza said the two men almost tripped over each other as they fled, but Sapienza also told WSOCTV that he was going to protect himself before they got inside.

Responding officers found pry marks on the door and part of the lock had been broken off.

Sapienza’s home, which his grandfather built in 1901, was targeted for a break-in about two years ago.

“This neighborhood has really changed,” he said. “It used to be I knew everybody.”

Sapienza was injured in 1980 when he was hit by a truck while riding a bicycle to work. He now uses either a walker or motorized scooter to get around, and he believes the suspects could have mistaken him for an easy target. But Sapienza is more concerned about his grandchildren, who often stay overnight with him.

In fact, Sapienza, at the suggestion of his daughter-in-law, decided to post a note on his front door to warn any potential intruders that the possible rewards definitely wouldn’t be worth the risk.

“To Whom It May Concern: I see you tried to break in, took my lock off my door. That’s okay, you try to break in my house again I will be waiting on you. Enter at your own risk,” the note read.

Sapienza said he hopes anyone planning to break in in the future will heed the warning.

“I don’t want to have to shoot anybody else,” he said.