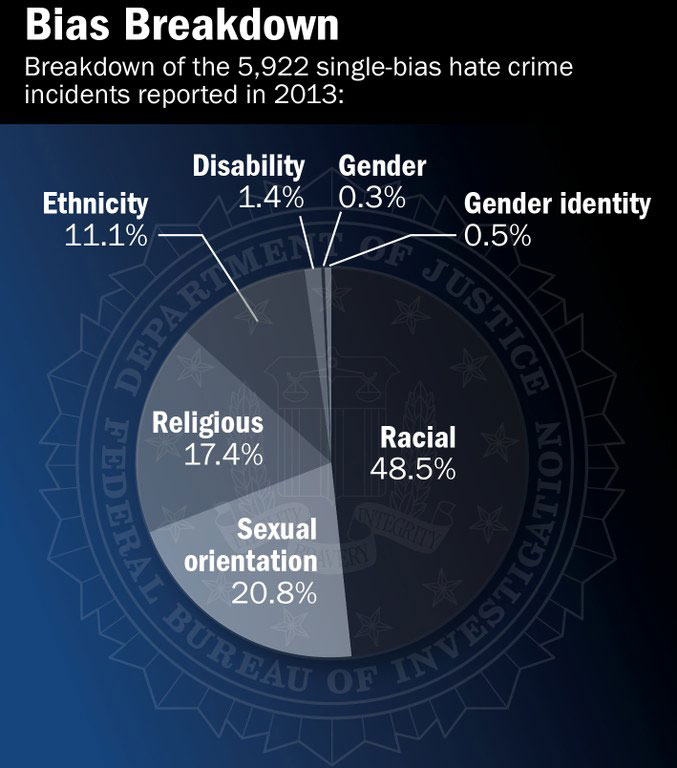 Hate crimes in the U.S. for 2013 decreased slightly from the year before with white males committing the majority of them and more than 30 percent of those being under the age of 18, according to an Federal Bureau of Investigation annual report on the subject released Monday.

Hate Crime Statistics, 2013 showed a total of 5,928 hate crimes in 2013, effecting a total of 7,242 victims, down from 6,573 the preceding year. Victims were defined as individuals, businesses, institutions, or society as a whole, depending on the nature of the offense.

The findings reflected recent changes made in data collection. The 2013 report was the first to show a separate category to reflect hate crimes committed based on gender (male or female) and gender identity (transgender and gender nonconformity). The report also included whether victims or offenders were juveniles.

Of the nearly 6,000 hate crimes, almost half of the victims were targeted due to race, as opposed to sex, creed, ethnicity and/or disability. Blacks were targeted the most, followed by whites and those of Asian descent.

When broken down by percentage, 20.8 percent of crimes were based on sexual orientation, most targeting gay males.

Ethnicity accounted for 11.1 percent of cases, most of which were of Mexican or Latino descent.

The hate crimes included 1.4 percent against those with disabilities, the majority of which were mental disabilities. Less than one percent of crimes were committed based on either gender or gender identity. Additionally, six incidents involving 12 victims were determined to be committed due to multiple biases rather than a single motivating factor.

Most of the hate crimes were determined to be crimes of intimidation, followed by simple assault and aggravated assault. Five ended in homicides and 21 total accounted for rapes.

Most hate crimes occurred inside a home or residence, the second most often scene being a public thoroughfare such as a road, sidewalk or alleyway.

California overwhelmingly topped all others states with the number of offenses, followed by New York and Ohio. At the other end of the spectrum, Wyoming only reported a single hate crime for 2013, Mississippi reported four and Alabama six.

The report also expanded the sub-categories found under sexual orientation, race and ethnicity. The Bureau’s Uniform Crime Reporting also changed the definition of rape for 2013, which the report reflected statistics from both definitions.

According to the FBI, hate crimes are a priority of their civil rights program. The Bureau investigates such crimes that fall under the federal jurisdiction, but also assists local authorities when needed. In addition, the FBI, along with the U.S. Department of Justice Civil Rights Division, observes developing cases and takes action when appropriate to prevent these crimes from occurring.