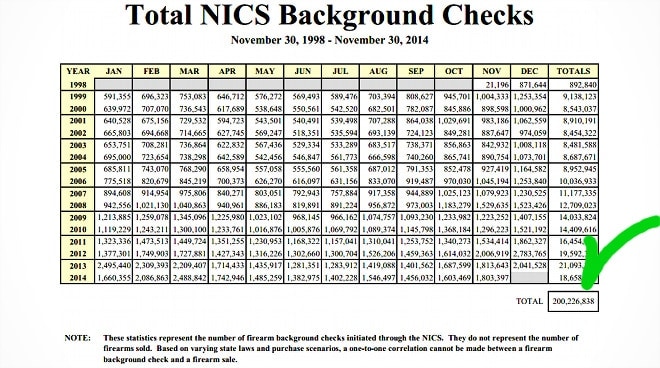 Of course, that doesn’t mean that there 200 million guns were sold in the U.S. or that there are 200 million new gun owners.  The FBI’s National Instant Criminal Background Check System only tracks the number of background checks during potential sales, which can include multiple guns per exchange, as well as used gun sales.

In a 2013 study, Pew Research estimated there are between 270 million to 300 million guns circulating in the country. While an exact figure of gun owners is unknown, Pew also estimates of the U.S. population — more than 316 million — roughly 37 percent own a firearm or firearms.

The only question remains, who takes the crown as the number one state when it comes to buying and transferring guns?

The winner, with 2,196,487 transfers, is Kentucky, the “We got a ton of guns, no joking” state, with California, Texas, Illinois and North Carolina trailing behind.

According to statistics from the FBI, of the more than 200 million checks performed, denials account for 0.32 percent of all federal background checks processed.