Opinion: Stealing is a crime (VIDEO)

Several months ago I had to spend the night at the airport in Tampa, Florida, as my connecting flight wasn’t set to depart until the next morning. After grabbing a cup of coffee and some snacks from the only open eatery I could find, I kicked off my shoes, turned the laptop on, and made myself as comfortable as possible. At around 3:20 the next morning, and still well over two hours before my flight, I noticed a guy in camo fatigues, who I had seen earlier going back out through security, walking towards the gates. He sat down in the middle of a row of seats about 30-feet from where I sat.

Now, I wasn’t sitting close enough to get a good look, but it struck me as somewhat odd that he wore a patch for Explosive Ordnance Demolition right below an Air Force pilot’s wings. From my own experience, I knew something wasn’t quite right, but I let the matter go. Besides, at that time of the morning, and with absolutely no sleep going on two days, I was well beyond the point of checking into the matter. In hindsight, and in light of a recent video, perhaps I should have said something.

The video I’m referring to is of Ryan Berk, a veteran of Afghanistan, confronting a military imposter in a Pennsylvania mall. Berk easily recognized that the American flag patch the imposter was wearing, as well as some of the other adornments, were not only inappropriately attached to his “uniform,” but worlds apart insofar as legitimacy. While video-taping the encounter on his mobile phone, the veteran shouted “Stolen valor!” as the phony, still pretending to be in the military, quickly slunk away.

I don’t have any numbers to point you to, but I do know that there are shops across the United States that offer discounts to active duty members of our military.  Since this imposter was holding a bag of shopping, one wonders if he had taken advantage of such benefits. 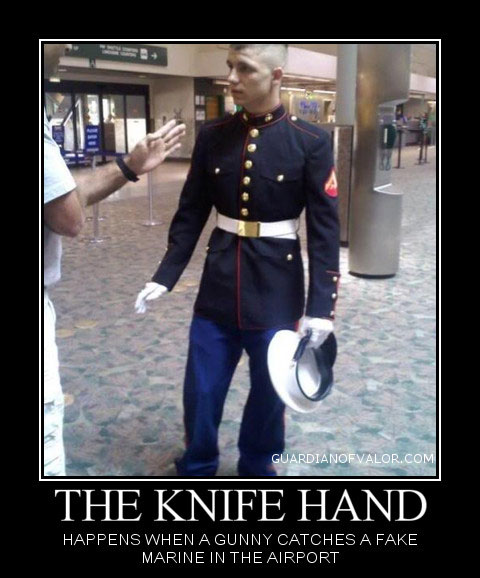 What exactly is “Stolen Valor”? The Stolen Valor Act of 2005 was signed into law by President George W. Bush.  It basically broadened prior provisions of U.S. law which already addressed the unauthorized wearing, manufacture, or the sale of any military-related decorations or medals. In short, falsely representing oneself as having received any of those aforementioned medals or decorations is a misdemeanor, with a possible six month prison sentence upon conviction. If one of those decorations signifies the Medal of Honor, however, the sentence can be up to one year.

In their “wisdom,” the U.S. Supreme Court struck down the law in June of 2012, citing their belief that it somehow violated the First Amendment’s provision regarding freedom of speech. I find this kind of thinking ridiculous. Over the years I have been in many airports in going to or from various garden spots around the world.  Often on these occasions in foreign lands, I have been left in awe at the incredible men and women who wear my the military uniforms of our country. To this day, my heart still swells when I see them. But, when I see or hear about an imposter, it enrages me beyond belief.

Anyway, and getting back to the confrontation which aired on Fox News, CBS, and several other outlets, the impersonator was identified as Sean Yetman, who claimed to be an Army Ranger. The whole incident took place on Black Friday. Berk, a Purple Heart recipient who served with the 2/506th 101st Airborne Division, was understandably incensed when he saw Yetman, and immediately knew that the man was an imposter. And, as it turns out, Yetman had been arrested in 2004 for impersonating a police officer.

Obviously it is the opinion of a great many of us that these types of individuals should spend time behind bars, and hopefully that will be the fate awaiting Mr. Yetman. In 2013, President Obama signed a version of the Stolen Valor Act, making it unlawful to impersonate or to claim any form of military service for personal gain. I’m hoping this is one case where the law is properly exercised.