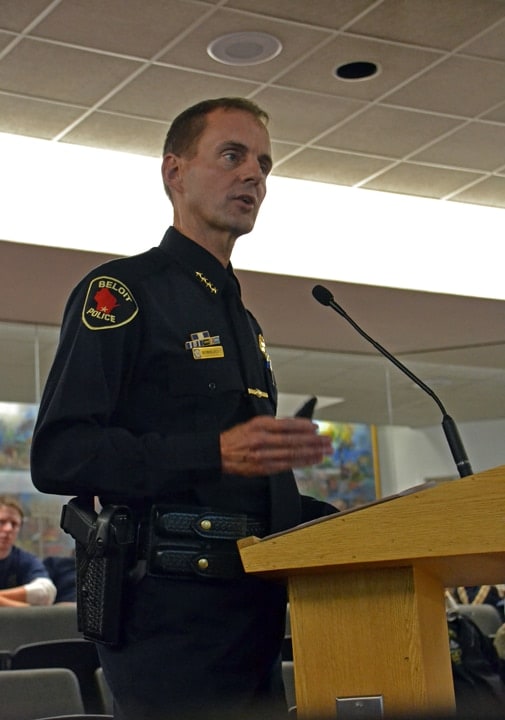 As part of its new “Consent to Inspect” program, authorities in Beloit, Wisconsin, want residents to open their doors so they can come and inspect for illegal guns without a warrant.

The effort is part of a new push to help get firearms off the streets in an area that has suffered an uptick in homicides this year. Beloit Police Chief Norm Jacobs feels that gun violence is a disease and his new program, which asks local residents to allow officers to come by and search for firearms and even modified toy guns, is a step to a cure.

“Gun violence is as serious as the Ebola virus is being represented in the media, and we should fight it using the tools that we’ve learned from our health providers,” Jacobs told Wisconsin Public Radio.

The program will allow officers to respond to calls from area residents who would consent to a check of the home after signing a waiver. The chief feels that these inspections by his officers can uncover firearms that the resident may not have even known were there.

“That’s really what we’re looking for,” explained Jacobs. “Maybe we’ll find a toy gun that’s been altered by a youngster in the house — and we know the tragedies that can occur there on occasion.”

Crime in the city of 36,000 located along the Southern Wisconsin border with Illinois was on the overall decline. According to the Beloit Daily News, just three homicides occurred in the jurisdiction in 2013. Of these three, one was chalked up to police who were cleared, one involved a vehicle, while the third, the shooting death of a 19-year old on a city street, remains unsolved. The year before just one homicide, a shooting of a man from Chicago, took place in Beloit.

However, so far in 2014 police report seven gun homicides with the majority being young men in their teens and 20s.

Beloit is not the only agency to think outside of the box in recent weeks on how to reduce the numbers of guns in circulation. Police in Buffalo, New York, are now visiting the homes of those recently departed in search of firearms as part of a new plan to help keep tabs on local guns. That program was described by outraged gun rights advocates as “ghoulish” and “the kind of behavior one might expect in a police state.”

Reaction to the news of the inspection program brought a quick backlash against the department in the form of negative feedback on the agency’s official Facebook page and the use of the #beloit twitter hash-tag, normally used in conjunction with Beloit College, for public outcry against the proposal.

This led the agency to post a statement to further explain the program, saying in part, “We do occasionally find that parents may not know what their kids or their kids (sic) friends are bringing into the house. This is just a tool to possibly help out. It is not a gun census, or a ploy to take legally purchased firearms from those that can legally posses (sic) them. It is not the only method to try to get guns, but it is one way.”