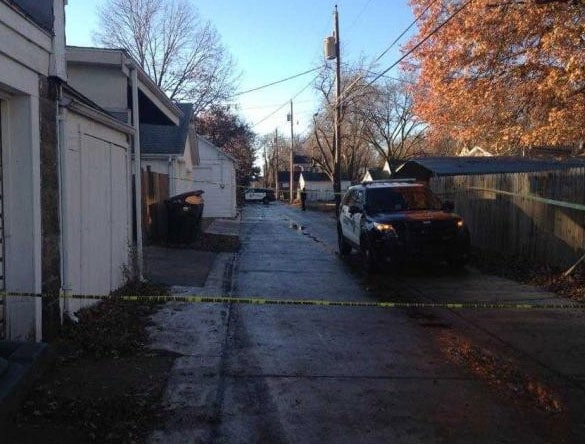 Authorities had to call in additional officers to keep people away from the crime scene. (Photo: The Topeka Capital-Journal)

A break-in gone wrong ended with two men heading to the hospital — a homeowner who was hit in the head with a brick and a robber suffering from three gunshots to the chest — Monday morning in Topeka.

It was about 4:30 a.m. when the resident heard a noise in his house and went downstairs to see the cause of the commotion, The Topeka Capital-Journal reported.

As the homeowner made his way towards the door, he saw that a brick had been thrown through the window and as he got closer, a second brick was thrown, this time hitting him in the face.

But when the homeowner saw an arm reaching through the broken glass in an attempt to open the door, he opened the door and confronted the suspect before he opened fire, striking the suspect three times in the chest. The suspect ran off and was found a short time later in an alleyway a few doors down.

Both the victim and the suspect, neither of whose names have been released, were transported to the hospital. The suspect’s injuries were initially believed to be potentially life-threatening but after undergoing surgery, he is expected to survive. The homeowner, whose nose was broken by one of the bricks, did not appear to have life-threatening injuries, but was kept for observation.

Authorities later discovered that the suspect and the victim live on the same block, but did not elaborate on what was believed to be the motivation behind the attempted break-in.

Don De Hart, who lives in the house in between the victim and the suspect, told reporters the incident hit just a little too close to home for him. Following the incident, De Hart talked with the victim, who told him his account of what happened.

“He just said I shot the guy that was trying to break in, and I shot him three times in the chest,” De Hart said, adding that the suspect had done work for the homeowner in the past.

“I hired him to help me, and he was real good help, as far as I was concerned, before he was a pretty sharp kid,” De Hart said.

The investigation is ongoing and no arrests have been made at this point. However, the homeowner said he and his family will be moving within the next few days.