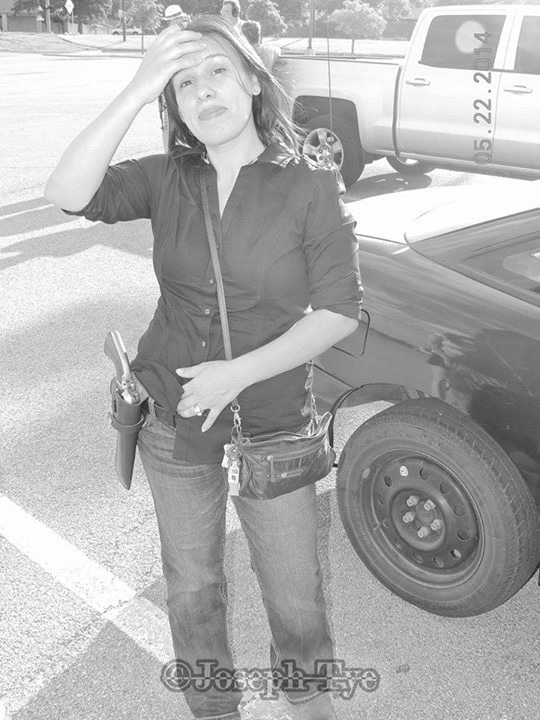 Veronica Dunnachie, 35, now a suspect in a double murder, is believed to be a member of two Texas open carry groups. (Photo: Facebook)

Arlington, Texas police advise that they have Veronica Dunnachie, 35, in custody after she drove herself to a mental hospital following the death of her husband and stepdaughter.

According to NBC-FW, the mother of four is in custody after Arlington Police responded to a residence Wednesday where they found 50-year-old Russell Dunnachie and his daughter, 20-year-old Kimberly Jo Dunnachie, dead. Veronica was subsequently taken into custody at the Millwood Hospital, an area mental health center.

Police confirm both that Dunnachie is facing capital murder charges and that her four minor children, three of whom are from Russell, are safe. The two were in the middle of a divorce.

Gun control advocates were quick to point out Thursday that Dunnachie is an apparent member of two open carry groups in the Arlington area, Open Carry Texas and Open Carry Tarrant County. A social media page believed to belong to Dunnachie shows numerous images of her at rallies for the groups and lists her as employed by a security company. Likewise, she is found in images maintained on both groups’ pages.

The Coalition to Stop Gun Violence posted the news story to their social media account Thursday morning, citing Dunnachie as a member of the two open carry groups. However, when asked by Guns.com to further explain their comment on the tragedy, representatives for the organization advised that to do so would be premature.

Kory Watkins, president of Open Carry Tarrant County, told Guns.com via email that Dunnachie is not a member of the group.